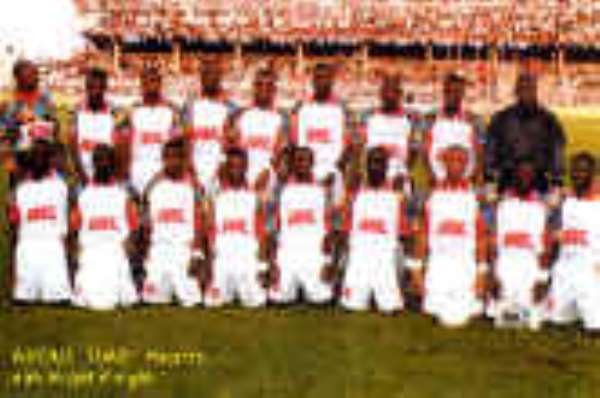 The Head Coach Of Accra Hearts Of Oak is waking up to the reality of defending last season’s league title without six of the regular players of the 2002 campaign. Hearts who are undefeated in the league have seen a mass exodus from their camp where at least four players have left for Europe to begin the foreign phase of their career.

He will play no further part in Hearts Of oak’s season. Bortey left Ghana last week and is reported to be settling in with his new teammates.

That subtracts from the attacking force of the phobians. But Coach Herbert Addo has more problems looming.

Midfield dynamo, Laryea Kingston, is also packing bag and baggage out of the Hearts of Oak camp.

He is destined for European football with maccabi Haifa in Europe even though he has vowed to return for the Hearts Kotoko game on August 10.

Captain Amankwaah Mireku typically has joined the European legion but his preferred choice is Eastern Europe where he hopes to make a name in Ukraine.

Edmund Copson, the tough midfielder, of whom great things were promised this season is simply unfit for game.

The player had skipped training for close to three weeks and when he finally showed up he did not last one hour on the field.

It is unlikely Copson will return to power the hearts of Oak midfield before the end of the season.

Last season’s general captain Joe Ansah has also parted ways with the phobians and is on the brink of a move to King Faisal.

Charles Allotey has also become a frequent absentee at training and might just be chucked from Herbert Addo’s team. But the coach is not the least perturbed.

He says his young players have the proper confidence peg and will be able to hold all manner of opposition in the Premier league.

The situation at Hearts these days is akin to the Musical Youth in the late 80s when Hearts cleared the old guard and blooded young talent.