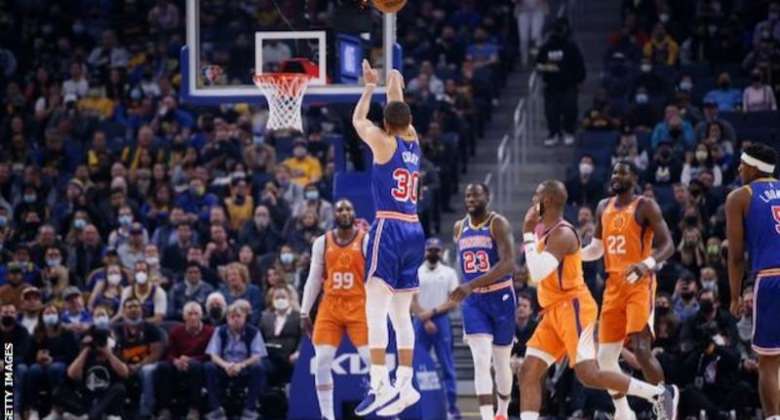 Curry made 23 points, five rebounds and five assists to make up for his below-par performance against the Suns earlier in the week, when he scored 12.

His six three-pointers on Friday leave him needing just 28 more to top the all-time list.

Hall of Famer Ray Allen currently leads on 2,973.
Andrew Wiggins added 19 points as the Warriors extended their winning run at home to 11, while Deandre Ayton top-scored for the Suns with 23 points.

The Lakers welcomed back LeBron James from his one-game absence under the NBA's health and safety protocols, after a positive Covid-19 test kept him out of Tuesday's win over the Sacramento Kings.

The Philadelphia 76ers narrowly defeated the Atlanta Hawks 98-96 with Joel Embiid scoring 28 points, including a 13-foot jump shot with 42 seconds remaining that gave the Sixers the lead for the first time.

The Cleveland Cavaliers brushed aside the Washington Wizards 116-101 while Eastern Conference leaders the Brooklyn Nets beat the Minnesota Timberwolves 110-105.

There were wins too for the Utah Jazz and the Miami Heat over the Boston Celtics and the Indiana Pacers respectively, while the New Orleans Pelicans comfortably defeated the Dallas Mavericks and the Houston Rockets claimed a two-point win over the Orlando Magic.