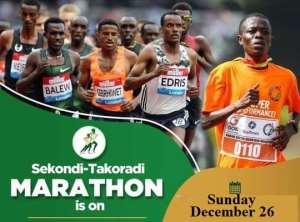 The Organisers of the annual Sekondi-Takoradi Marathon (STM), has assured all stakeholders that, the second edition of the event fixed for Sunday, December 26, will see a massive improvement in the management and organization of the event.

Mr Henri Senyo Penni – General Manager of Medivents Consult, Organisers of the event stated that his outfit had learnt a lot of useful lessons, after successfully organizing the maiden edition in 2020.

According to Mr Penni, this year’s event would witness more efficient management of the 21-kilometre route for the race, whilst the security of athletes would also be given a top priority.

Speaking in an interview with the GNA Sports, he said his outfit had made contacts with the Ghana Athletics Association (GAA) to inspect and certify the routes for the race to meet the standards of World Athletics.

Mr Penni added that plans were in place to set a well-resourced medical lounge at the finish point to ensure that athletes who will have medical issues would be given adequate care.

“The STM is gradually becoming one of the biggest races in the country due to the successes it chalked last year and we are ready to make it bigger,” he added.

Commenting on the prize package for the second edition, he said they are in consultation with their sponsors to improve the prizes for the winners in both male and female categories.

He said they would also introduce other prize categories such as “The Youngest Runner” “The Oldest Athlete”, “Winner for security services” among others.

The STM is sponsored by Africa World Airlines (AWA), mybet.africa, Lucozade, and Cowbell.

The STM is under the auspices of the Western Regional Coordinating Council (WRCC), and organized by Medivents Consult with support from Total Marketing and Tours Limited (TMTL).

Aluta Continua: We are unable to call off strike – UG-UTAG t...
38 minutes ago