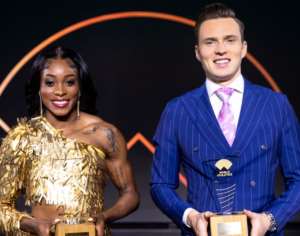 Warholm, 25, won his award for beating the 29-year-old world record and taking Olympic gold in a stellar 2021,

His Tokyo time of 45.94 seconds is widely considered one of the greatest Olympic track performances of all time.

Thompson-Herah, 29, took the women's award for achieving the sprint double at a second consecutive Olympics.

She beat compatriot Shelly-Ann Fraser-Pryce to the 100m gold in Tokyo and held off Namibian teenager Christine Mboma to retain her 200m title, repeating the Olympic double she won at Rio 2016.

Thompson-Herah also clocked 10.54sec over 100m and 21.53sec over 200m to move second in the world all-time rankings behind the late Florence Griffith Joyner.

Compatriot Erriyon Knighton, who at just 17 finished fourth in the men's 200m final in Tokyo, won the equivalent men's award.