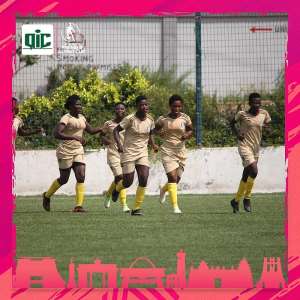 A clash between Ampem Darkoa Ladies and Hasaacas Ladies will headline the last four of the ongoing Women’s Premier Super Cup as the competition enters the semi-final stage on Thursday.

Ampem Darkoa Ladies topped Group A after thumping ‘flamboyant’ Berry Ladies 3:1 on Match Day 3 at the McDan La Town Park to finish the Group stage unbeaten. The “Nanamma” won two and drew one ending the Group with 7 points from three matches.

Prisons Ladies came second in Group A with 4 points after putting two-pass Soccer Intellectuals on Match Day 3 to seal a semi-final berth.

Group B saw LadyStrikers top the table with 7 points after dispatching Ashtown Ladies in 4-2 in a six goal thriller.

On the other hand Hasaacas Ladies emerged as runners up after a Success Ameyaa solitary goal helped them to a 1-0 win against Kumasi Sports Academy thus getting the nod with 6 points to qualify.

A battle between LadyStrikers and Prisons Ladies will complete the semi-final pack to set the tone for the finals.

The Semi Final matches come off on Thursday, December 2, 2021 at the Madina Zongo Astro Turf.