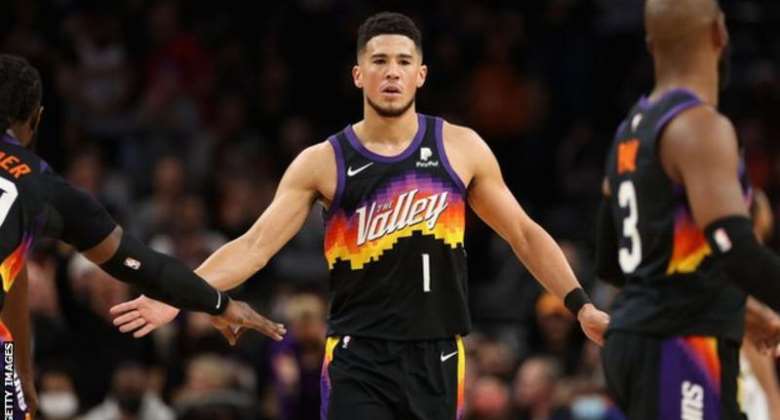 The Phoenix Suns stifled Stephen Curry in a superb defensive display to beat the Golden State Warriors 104-96 in the teams' keenly anticipated showdown.

The Suns won despite losing Devin Booker to a hamstring injury in the second quarter.

DeAndre Ayton led the Suns' scorers with 24 points and 11 rebounds.

Elsewhere the Los Angeles Lakers overcame the absence of LeBron James to cruise to a 117-92 win away to the Sacramento Kings.

Reports claim the 36-year-old has tested positive for Covid and is without symptoms, although that has not been confirmed by James or the Lakers.

NBA rules state that a player must go through a minimum 10-day isolation period after a positive test, avoiding physical exercise, before they can return to their team.

James has already missed 12 of the Lakers' 23 games because of injuries and a suspension this season.

The Warriors came into their meeting with the Suns on the back of seven straight wins, but they were never allowed to find their rhythm by a hustling home defence.

After Booker had hobbled off court, it was left to 36-year-old veteran Chris Paul to fill in the second half, finishing with 15 points, 11 assists and six rebounds.

Curry was restricted to just 12 points as his three-point game was shut down. The two-time league Most Valuable Player landed only three of his 14 attempts from long range.

Victory pulls Phoenix level with Golden State at the top of the Western Conference with 18 wins and three defeats each.

Harden joined the Nets from the Houston Rockets in January

Harden finished with 34 points, 19 rebounds and eight assists and was well supported by fellow superstar Kevin Durant, who added another 27 points.

A three-pointer from the Knicks' Evan Fournier set up a thrilling finale, tying the scores at 110-110 with 17.7 seconds to go.

But James Johnson was fouled and then held his nerve on the free-throw line to clinch victory for the hosts.