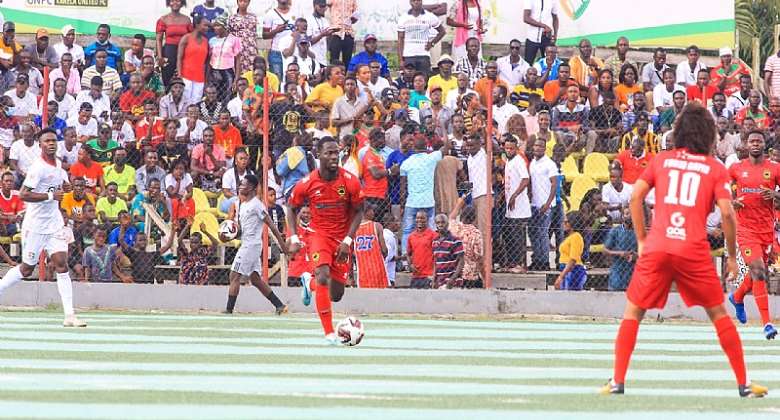 The matchday five of the 2021/22 Ghana Premier League has ended successfully at the various stadia.

Below is the full wrap up of the games played.
The Porcupine Warriors were unable to make it five wins on the spin when they played as guests at CAM Park on Sunday.

Asante Kotoko’s winning run in the Ghana Premier League has been ended after a 0-0 draw with Karela United on Sunday.

Playing away at Crosby Awuah Memorial Park in Aiyinase, the Porcupine Warriors, like the hosts, drew blanks to share the spoils in the matchday five fixture.

It brings to an end a streak of victories at the expense of Dreams, Bechem United, Gold Stars and Eleven Wonders.

Karela, meanwhile, hold the 10th position.
Bechem United have moved to third on the standings after a 3-1 home win over Dreams, thanks to goals from Emmanuel Avornyo, Augustine Okrah and Yaw Dasi Obuoba. Ali Huzaf, interestingly, scored first for Dreams who are seventh on the order.

At Dum’s Park, Frank Adjei Jr and Prince Owusu were on target to help Gold Stars to a 2-0 home triumph over fellow newly-promoted Accra Lions. The two teams sit sixth and 16th, respectively, on the table.

Real Tamale United, the third of the new boys, secured a 2-0 home victory over four-time champions Ashanti Gold, with goals from Ishmael Nketiah and Yusif Nurudeen. The two sides are tied on seven points apiece, but RTU sit one place higher on the eighth position owing to a better goal record.

Last but not least on Sunday, Eleven Wonders handed Elmina Sharks a 3-1 away defeat to take over the 12th spot. Mohammed Tetteh’s double and Abass Ganiu’s strike ensured three points for the Techiman-based club at the expense of second-from-bottom Sharks, whose consolation came from Isaac Donkor.

On Saturday, Wafa pipped Great Olympics 1-0 in Sogakope, with a decisive goal from Justus Torsutsey. The clubs are 14th and fifth, respectively, on the standings.

Earlier on Friday, Legon Cities suffered a 1-0 home defeat to Aduana Stars, who had veteran striker Yahaya Mohammed to thank for a cracking goal from a free-kick. The loss has left the Royals 13th on the table while the Fire Boys hold the fourth spot.

Hearts of Oak’s clash with Berekum Chelsea has been postponed due to the former’s Caf Confederation Cup engagement with Algerian fold Saoura on Sunday.

Finance Minister announce transactions to be excluded from E...
19 minutes ago