By The Moscow Times 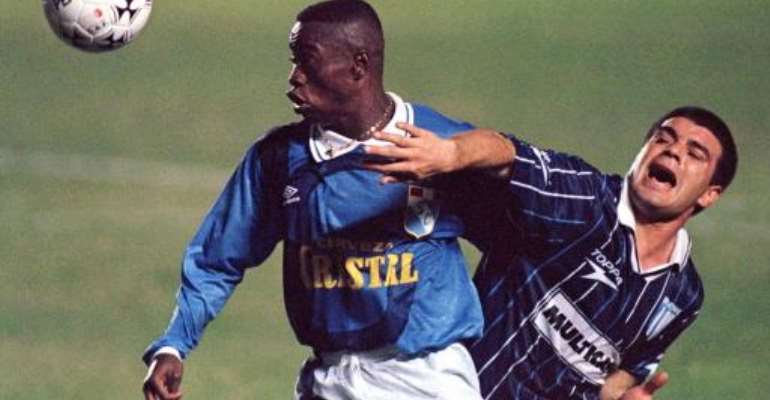 Russia's first all-star game will take place Monday as the Russian national team takes on a select 11 of the country's top foreign soccer players. The game, though, is more than a fanfare to the end of the first half of the season: It's the first sign of a new attempt to fight racism in Russian soccer.

Two days before the game, a typical scene took place at Dynamo stadium during the 1-1 draw between Dynamo and Saturn. As Saturn's midfielder Prince Amoako walked off the pitch, Dynamo fans from the main stand began to shout abuse at him. He had been called "monkey" and "black bastard" already during the match, but this time the Dynamo fans began to make monkey noises to laughter from fans around them.

Amoako, from Ghana, is one of more than 200 foreign players now making their living in the Russian Premier League, including 23 from eight different African countries and 22 from Brazil alone.

Black players have become an easy target for fans.

This season, Spartak fans unveiled a banner saying "Blacks Go Home" at a league match against Rubin in Kazan after a bad run of form. Local police acted and tore the banner down. Spartak fans planned a protest against black players at a reserve match by throwing bananas onto the pitch.

More common than throwing bananas is the casual racism from a minority of the crowd as seen at Dynamo, with black players sometimes booed and racially abused. With smaller crowds and less of a fan culture, in Russia, in comparison to the singing and chanting of other European countries -- such as England in the 1980s -- racism in stadiums is not as evident.

Outside the stadium, though, soccer fans and skinheads -- who are often seen as the same thing, sometimes unfairly, sometimes not, -- have been party to numerous attacks on Africans and people from the Caucasus. Cameroonian Jerry Christian Tchuisse admitted last year that when he played for Spartak Moscow, he did not go outside for fear of attacks.

The game Monday will take place as part of the European soccer body UEFA's campaign against racism.

"It's a very good initiative we've been developing in our work with national associations and clubs to promote the campaign against racism in Europe," said Mike Lee, the communications director of UEFA.

"This initiative by the RFU is an important sign of their commitment," Lee said.

Apart from the match, the union has pledged to pass regulations on the behavior of fans, have anti-racism materials at the stadiums and to arrange for veterans and foreign players to visit schools.

"My impression is that it is the first real effort to admit problems and do something," said Kurt Wachter, the project coordinator for Football Against Racism in Europe, which has been advising the RFU.

Russian soccer has long been slack in facing up to its problems. Not only is it quite easy to find racist material at football matches, some clubs allow kiosks on its grounds to sell magazines and videos that glorify violence and support racism.

Although in the official letter to UEFA the RFU talks of the "urgent problem" of racism in Russian soccer, few football officials would describe it as an urgent problem.

Alexander Tukmanov, the technical director of the RFU, initially said there was no racism in Russian soccer, as did a number of other officials.

Some worry that the RFU is not taking the problem of racism seriously enough. Krylya Sovietov Samara, which says the idea of a match against racism was its, had planned to organize the match in Samara.

"We have a very international club," said Arnold Epshtein, press secretary of Krylya. But he expressed doubts about hosting the match in the "most racist city in the country."

Others admit that things are not good.

"There is a problem," said Vladimir Gryshin, the head of the Spartak fan club.

"We constantly try to explain that the most important thing is not the color of the skin ... but we're not always successful."