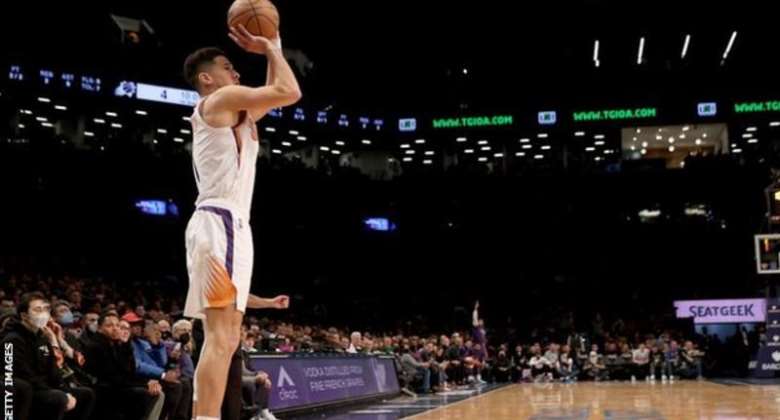 Devin Booker top-scored for the Suns with 30 points

The Phoenix Suns beat the Brooklyn Nets 113-107 to stretch their winning streak to 16 games, one away from their franchise record.

The Suns were led by Devin Booker's 30 points, with Chris Paul adding 22 and registering his 5,000th career rebound.

The Nets' Kevin Durant was the game's top scorer with 39 points, while James Harden made a triple-double.

"Obviously, everybody knows the ultimate goal is to win a championship," said Paul.

"But if you don't enjoy the small victories throughout the regular season, then what the hell are you doing?"

The Suns, last season's beaten finalists, had led by as many as 22 points at the beginning of the fourth quarter and survived a late charge by the Eastern Conference leaders to extend their record to 17-3 for the season.

They can equal their record winning streak when they face the NBA's top team the Golden State Warriors (17-2) on Tuesday.

"I'm looking forward to it," said Booker. "Obviously not a make it or break-it game, not a play-off game, but we know it's going to be high-energy, the two best records in the NBA. It's going to a high-intensity, fun game."

COVID-19: Our responsibility to one another is to get vaccin...
43 minutes ago

Bawku disturbance: Cooperate with government to ensure peace...
51 minutes ago