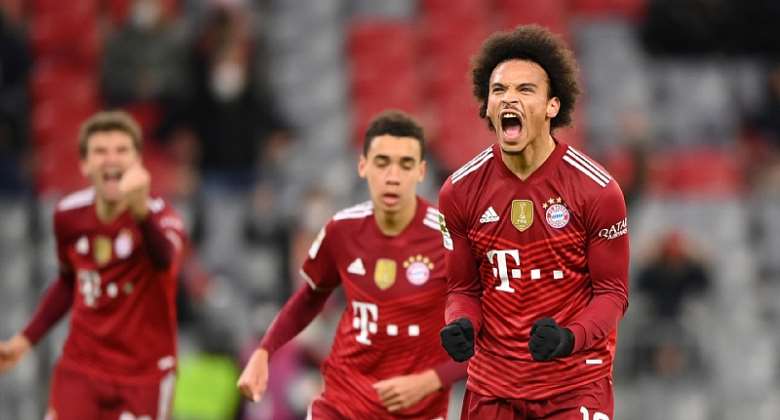 Bayern Munich returned to the top of the Bundesliga with a less than convincing 1-0 victory over lowly Arminia Bielefeld at the Allianz Arena.

Creating chances wasn't an issue for Julian Nagelsmann's men, but they were uncharacteristically wasteful when the opportunities arose. The visitors defended admirably until the breakthrough came in the second half through Leroy Sane.

After an open start to the game, Bayern soon began to dominate, pushing Arminia back with their pace in wide areas from Kingsley Coman and Alphonso Davies.

Thomas Muller went close twice in quick succession; first, his looping header from Coman's cross was cleared off the line, before Stefan Ortega denied him with an excellent save.

Sane had chances, and Robert Lewandowski saw a shot deflect wide. On the night Bayern were looking to break the record for the most Bundesliga goals scored in a calendar year, they failed to score in the first half of a match for just the second time this season.

Arminia pushed forward when they could and carried a threat through Patrick Wimmer and Masaya Okugawa. But they got in each other's way towards the end of the first half as their best chance went begging.

Sane almost opened the scoring seconds after the break. Incisive one-touch play between Dayot Upamecano, Corentin Tolisso and Muller put him through on goal, but somehow his effort trickled the wrong side of the post.

There was nothing wrong with Bayern's purpose and intensity, as Lewandowski knocked down for Muller at point-blank range. Somehow, another chance went begging.

Coman reached the byline and crossed for Lewandowski, but he couldn't quite reach him. More chances came for Sane, Muller and Davies as Bayern's frustration grew.

But then, with just under 20 minutes remaining, Sane struck from the edge of the area and into the top corner, giving Bayern their 102nd and record-breaking Bundesliga goal of 2021.

Coman was denied by the excellent Ortega soon after, and Serge Gnabry, who replaced Sane moments after his goal, struck the bar ferociously.

The hosts controlled the game for much of the latter stages and were rewarded for their perseverance with the victory. Arminia's rearguard did not get what it deserved and they stay in the automatic relegation zone.

You have collapse the economy, now you want us to pay E-Levy...
8 minutes ago