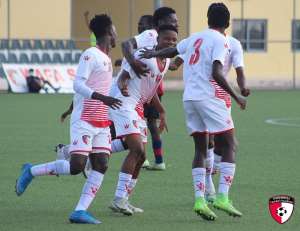 The team based in Sogakope has had a very slow start to the new league season after failing to win any single game in the first four matches prior to today’s encounter.

Challenged with facing a very good side in Great Olympics today, WAFA SC set up strong at the Red Bull Arena today poised to fight to secure the needed win to get back on track.

Although the team will play well in the first half, they failed to find the back of the net, the same as the visiting team.

On the back of a fierce battle in the second half, WAFA SC managed to get over the finish line thanks to a late penalty kick converted by prolific striker Justus Torsutsey in injury time.

With today’s win, WAFA SC have moved out of the relegation zone and are now in 10th position on the Ghana Premier League table.