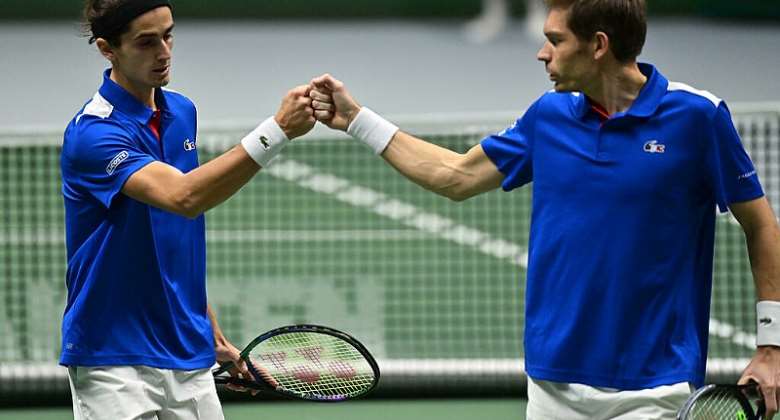 France launched their quest for an 11th Davis Cup on Thursday night with a 2-1 victory over the Czech Republic in Innsbruck.

The opening singles match in the men's national team competition ended badly for the French.

Adrian Mannarino drew France level after coming from a set down to beat Jiri Veseley 6-7, 6-4, 6-2.

Pierre-Hugues Herbert and Nicolas Mahut, winners of the 2021 season ending championships for doubles teams, then went out for the deciding match against the unheralded pair Zdenek Kolar and Jiri Lehecka.

The Czechs claimed Herbert's serve to take a 4-2 lead and wrapped up the opening set 6-3 after 37 minutes.

The French pair squandered four break points int he eighth game as the Czech duo dug deep to level at 4-4.

Comeback
But they took Lehecka's service game to claim the second set 6-4 and level the match after 86 minutes.

Mahut and Herbert broke for a 3-1 lead in the decider and held on to their advantage to take the set 6-3 and the match after two hours and five minutes.

"They were fairly slow conditions and it took us some time to adjust," said Herbert after the match.

Sébastien Grosjean, the France team skipper, added: "It was a long and difficult night. The Czechs played well in all three matches. I'm proud of my players because we faced some low moments but they've come through."

On Saturday, France can book their place in the quarter-finals from Group C with victory over Britain.

In Group B on Thursday in Madrid, Sweden beat Canada 3-0 and in Group D in Turin, the 2018 champions Croatia opened their account with a 3-0 romp past Australia.