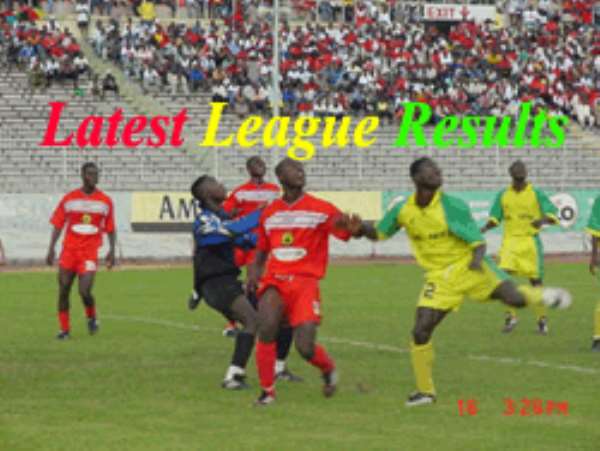 Here are the results of some of the Kinapharma premiere league matches played throughout the country yesterday:- Accra: Hearts 1-1 Goldfields Kumasi: Kotoko 4-0 B.A. United Kpando: Lions 1-1 Olympics Sunyani: Bofoakwa 1-1 Faisal K'dua: Power 1-0 Hasaacas Prestea: Minestars 1-0 Okwahu Berekum: Arsenals 0-0 Stay Cool Accra: Liberty RTU (Today) Kotoko whitewashed Brong-Ahafo United Kumasi Asante Kotoko whitewashed Brong-Ahafo United 4-0 in their match played at the Kumasi sports stadium. It was a match, which was completely dominated by Kotoko right from the start of the game. After the kick-off by the visitors, Nana Arhin Duah of Kotoko missed a begging chance to deny Kotoko the opener in the early minute when he shot wide while Isaac Boakye also missed another chance in the fifth minute. B/A United also counter-attacked and nearly scored in the 15th minute but goalkeeper George Owu came out strongly to save the situation. However, Nana Arhin Duah opened the scores for Kotoko in the 22nd minute with a low grounder when he perfectly connected a cross from Yusif Chibsah which goalkeeper Ahmed Alahiden failed to grab. Kotoko continued probing for goals as they put the defence of the visitors in total disarray. The intense pressure made B/A United adopt very tough tackling tactics resulting in many infringements which compelled referee Jomo Ameh from Accra to show Quansah the red card for a foul on Isaac Boakye. The kick taken by Stephen Oduro was headed home by Isaac Boakye in the 41st minute to increase the tally to 2-0. Boakye was on hand again to make the score 3-0 in the 45th minute when he connected home Aziz Ansah's cross. On resumption, B/A United replaced goalkeeper Alahiden with Samuel Quansah who saved many dangerous situations from the slippery Kotoko attacking machinery. Kotoko made it 4-0 in the 55th minute when Aziz Ansah who had moved deep into the visitors vital area scored in a goalmouth melee. Boakye, who was a thorn in the flesh of the visitors, was substituted by Kwadwo Poku in the 67th minute while Joe Louis also came in for Michael Asante two minutes later. B/A United brought in Alex Djanie for Osman Sakora. Nana Frimpong, formerly of Kotoko, made a last minute attempt to reduce the tally but his power-ladden shot was saved by goalkeeper Owu. Other Matches Goldfield descended on Accra yesterday to hold Hearts of Oak to a 1-1 draw and leave the Phobians family in mourning ahead of the crunch African champions league second round tie in Accra.Goldfields scored first through a Ken Ababio victory in the 57th minute before Emmanuel Osei equalised for them on 75 minutes also through a free-kick.
It’s a draw that would leave all Phobians nervous ahead of the game which they must win by 4-0 to stand any chance of progressing further.
The draw for Goldfields would add more tension to their outstanding league match against Asante Kotoko which comes off at the Kumasi Stadium on June 4.
Goldfields scored first early in the game but as happened in their opening league match against Liberty Professionals Hearts rallied back to score the equalizer five minutes from time.
In Kpandu, Great Olympics were unable to post their third straight league win but they still did enough to hold Kpando Heart of Lions to a 1-1 draw and steal a vital away point from Kpando
It was a good return to Kpando for former national coach Emmanuel Afranie who guided Lions’ dramatic rise from nobodies into premier league campaigners.
Hasaacas went down 0-1 to Power FC in Koforidua but Hasaacas chairman Nanabanyin Eyisson blamed poor sportsmanship and the reluctance of the center referee to stamp out time wasting for their defeat.