Olympic Complex Please; in Memory of the Dead 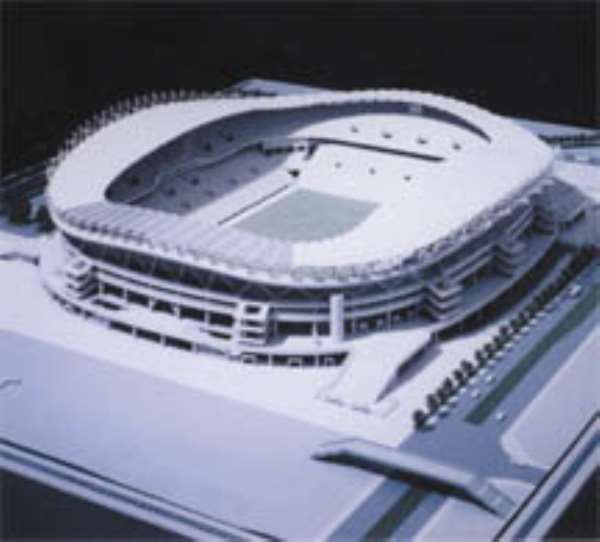 Time, they say, heals. But for the bereaved families of the 127 soccer fans who perished in the Accra Sports Stadium Disaster of May 9, 2001, time has stood still. The same emptiness felt in the heart on learning that the loved ones who together with other enthusiastic followers of Kumasi Asante Kotoko and Accra Hearts of Oak, trooped to the national arena have ended in the morgue instead of their respective homes, is yet to be filled.

But life, no matter how hard, has moved on.

On Friday, a moving scene was enacted at the entrance to the Accra Sports Stadium to remember those who perished and to unveil a monument to their memory. Vice-President Alhaji Aliu Mahama, who was pencilled in to rally the troops on such a gloomy day, could not make it. As Acting Head of State in the absence of President John Agyekum Kufuor, the Veep was summoned another function elsewhere. But his lieutenants ably held the fort.

Jake Obetsebi-Lamptey, Minister of Tourism and the Modernization of the Capital City, held the fort for the Veep. He was assisted by Kwadwo Baah-Wiredu, Minister of Youth, Education and Sports (YES) with his able colleagues Christine Churcher, Minister of State for Girl-Child Education, Rasheed Bawa, Minister of State at YES, Joe Aggrey, Deputy Minister at YES, officials and followers of Accra Hearts of Oak and Kotoko and a cross section of sporting and political personalities.

The Tourism Minister, gracefully unveiled the monument - a 12 foot bronze sculpture depicting a person in distress being carried away. The horror of the event is depicted in both the carrier and the person being carried both screaming for help.

On the day of the disaster help came too late for 127 souls. It is to serve as a lasting monument that never again should a disaster of such magnitude hit Ghana sports.

The two-tonne statue is the handiwork of Mrs Gladys Adinyira Wuaku of Dyssy Art Studio in Accra.

The idea, according to the Acting Chief Executive of the National Sports Council, "is to immortalize the souls of our brothers and sisters." But as the tears dry and the bereaved get on with their lives, the question that has to be answered is this: How prepared are we to avoid another disaster at our various stadia. It is all well and good that the Ministry of Youth, Education and Sports has ordered a temporary closure of the Osu Stand at the Accra Sports Stadium. It is a disaster waiting to happen.

I belong to a school of thought, which holds that the most effective means of erecting a monument to the dead is by constructing a new Olympic Complex for use in Accra.

The Accra Sports Stadium has served this country well. But it cannot continue to offer many services with its crumbling infrastructure. The Stadium was constructed in 1952 following a recommendation by the Coussey Committee, which probed disturbances in the then Gold Coast in 1948.

One of the important findings of the committee was that lack of a recreational area in the capital city meant that they youth had virtually nowhere to engage in competitive sport. The British colonial administration accepted the findings and funded the construction of the stadium. When the Stadium opened, it was a showcase in Sub-Saharan Africa. Non of the countries in the region boasted facilities like that and instantly gave this country a head start in competitive sports.

When the United African Company (UAC) now Unilever constructed the Kumasi Sports Stadium in 1958, the two provided the platform for the upliftment of sports.

Nothing lasts forever. It is now time to relieve the Accra Sports Stadium especially of the pressure of hosting major international sporting events in addition to fixtures. That is one reason, I am appealing to the authorities to endeavour to borrow money to give Accra, a fitting national stadium complex. I am unaware of the dire economic conditions the country finds itself at the moment. I also believe that a national stadium complex is long overdue.

There is evidence that a properly run sports complex will pay for itself. It could encourage tourism in the field of sports. It would also enable those countries to boldly compete with the rest of Africa in hosting major events.

One of the advantages of sports promotion in the late 1950s and 60s was the facilities the Accra and Kumasi Sports Stadium provided the country.

At a time Nigeria, for instance, had no stadium of international standing, Ghana had Accra and Kumasi Stadia, which hosted major international matches in football, athletics, boxing and table tennis.

In those days Ghana invited world class teams like Real Madrid with Puskas and Di Stefano playing to rub shoulders with local talents. The great Pele arrived on tour with the great Santos Club of Brazil.

Now all these are things of the past. With falling infrastructure, the nation even lacks the courage to invite foreign teams.

Some of us have been clamouring for Ghana to stage the All-Africa Games, Africa's version of the Olympic Games. But currently, as sports infrastructure stands, it would be impossible for this country to host any event of international sporting standards. The reason is simple. Lack of facilities has made Ghana sports limp for years now.

All around us, nations have facilities that put this nation, one of the nations that really pioneered international sports on the continent to shame. Not too long ago, the National Sports Council mooted the idea of hosting national athletics trials in Lome, Togo, simply because the running tracks at both the Accra and Kumasi Sports Stadia are obsolete.

In 1978, when the Accra Sports Stadium was renovated for the 13th African Cup of Nations, facilities were provided for the construction of a standard swimming pool. Instead of the competition the pool was expected to generate, the swimming pool site became the breeding grounds for toads and mosquitoes.

One of the achievements highlighted by the former Minister of Youth and Sports, while in office was that he succeeded in getting the weeds around the swimming pool to be cleared. It looked like a joke. But with the serious business of providing sports infrastructure lacking, we are now the subject of crude jokes by international teams that come visiting.

I appreciate the problem of serious financial strain in the body politic. But a sporting arena cannot fail to pay for itself. There are a number of businesses that feed off sports infrastructure. The serious business of sports tourism could only flourish when there are standard stadia to attract quality teams from far and near.

We are getting to a time in our lives as a sporting nation when we ought to stand up and be counted. Last time round, when the Sports Writers Association of Ghana asked the authorities to bid for the All Africa Games as opposed to the African Cup of Nations being proposed, we were called names. Some officials were of the view that a bid for the All Africa Games was a bit on the ambitious side. But as founding members of the Supreme Council for Sports in Africa, the umbrella organization that organizes the Pan African Games, we have to play our part and effectively.

The Games started in Congo Brazaville in 1965, conceived as a four yearly event. But lack of bids from member countries consigned the games to the sidelines until Nigeria came to the rescue in 1973. Algeria followed in 1978. The games then went into hibernation until 1987 when Kenya hosted the event. Since then, South Africa, Zimbabwe, Egypt have had their turns. In October, this year, the youth of Africa will gather in Abuja, the Nigerian capital for the Games. It would be the second time Nigeria would host the games.

Ghana can ill-afford to be sidelines in major sporting hosting forever. It is time to kick-start of dwindling fortunes by bidding for and hosting major events. There cannot be a better monument to the 127 people who perished watching their favourite game of football than constructing a National Olympic Complex to their memory. Someone should listen to the cries of the dead and living.