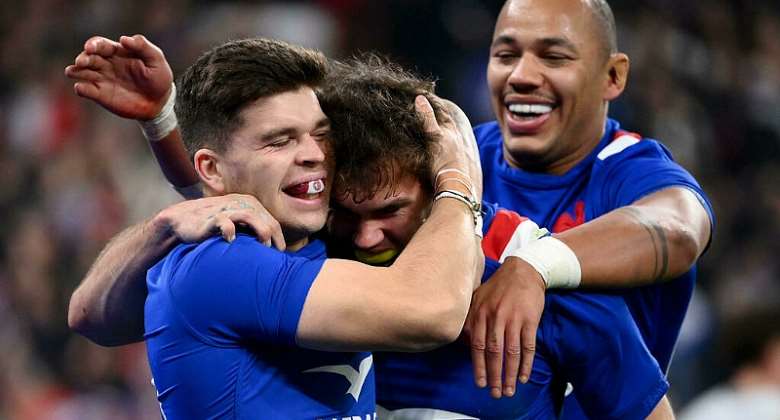 France swept past a witlessly sloppy New Zealand side in two waves on Saturday night at the Stade de France to underline their credentials as one of the favourites for the 2022 Six Nations Championship as well as the rugby World Cup in 2023.

A pulsating match ended 40-25 as France beat the illustrious visitors for the first time in 14 games spanning 12 years.

The French - fielding their star midfield pairing of Antoine Dupont at scrum half and Romain Ntamack at fly-half - started in a hurry.

They scored in their first surge upfield. Peato Mauvaka touched down following a ruck on the left touch line. Barely three minutes had passed.

Melvyn Jaminent added the conversion to fire the crowd. Two quick penalties from Jordie Barrett brought it back to a one point deficit at 7-6.

Ntamack scored France's second try of the night with a slick bit of footwork. He went over near the posts setting up an easy conversion for Jaminet. France then piled on the points and went in at half-time leading 24-6, Mauvaka having added his second of the night.

Would such raggedness continue from the comically static visitors?

Reaction
The New Zealand response came after the break. Barrett went over for a try followed by Rieko Ioane. When Barrett added the conversion to Ardie Savea's try, it was 27-25 and game on.

But New Zealand indiscipline stopped the resurgence. Savea was shown a yellow card and sin-binne for slowing play down. Jaminet was able to convert the ensuing penalty to make it 30-25

Four minutes later, Damian Penaud's interception and try under the posts effectively ended the contest at 37-25.

In the final minutes, both sides of the stadium were singing La Marseillaise and Jaminet rounded off an impressive performance with a penalty at the end to take his points tally up to 20 and France to 40.

Three quarters of the 78,000 in the stadium stayed for the lap of honour and to savour France's first win over the All Blacks since a 27-22 victory in a mid-year rugby tour in Dunedin in 2009.

There have been some pummelings since then on the French - most notably the 62-13 annihilation in the last eight at the 2015 rugby World Cup.

France will host the next edition of that tournament in two years. A similar scoreline to Saturday night's in the final would go down well with the partisans.