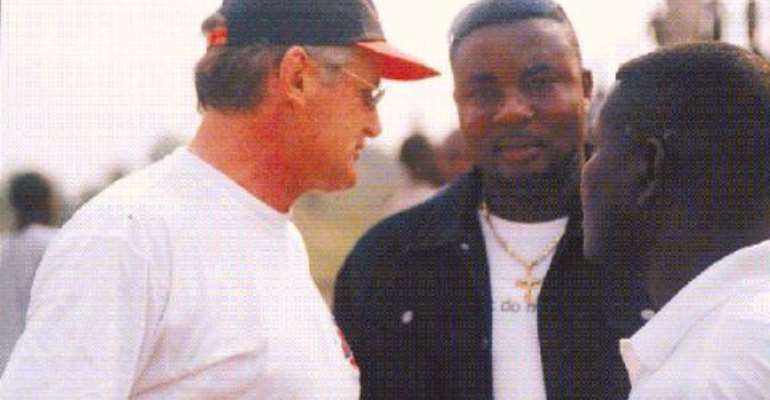 The last time Kpandu Heart of Lions hosted Ghana's champion club and their namesake, Accra Hearts of Oak, it was as though the whole of Kpandu had been liberated.

At the modest grounds where the friendly match, which Hearts used to prepare for their fatal African Champions League second leg tie against Stade Malien, was played, you could hardly find an empty space. And even though they lost, the town's folk still lined the streets to wave at club founder and financier, Victor Ahiakpor, and his entourage as they drove past in their impressive collection of cars.

One year on, Ahiakpor's money, which looks like he could employ almost anyone in Ghana football, has ensured that the people of Kpandu would see the likes of Hearts, Kotoko, Liberty and Goldfields on a more regular basis at least for a year.

When Heart of Lions whipped Yeji Stars 4-0 to finish top of the national middle league and qualify for the premier league, it marked another page in the short but impressive history of the club.

Formed in the closing months of 2001, the club has risen from nowhere to become one of the most talked-about in the system. Most of the things they did in search of premiership qualification run contrary to long-held perceptions about how much the lower divisions can drain resources and all the unspoken crap about why you must never invest too much in a division one league club.

The result of the fearless spending is that the Volta region, after several years of hibernation from the elite division, would have a representative there.

Ho Voradep was the last and if the manner they thrilled us throughout their stay is anything to go by, then we should hail the addition of another team from that region to the national premier league.

Already, some analysts are counting what the potential benefit of Lions' qualification would be for the region in terms of football. It would for the football fans in the region mean that top class football, at least by the definition of the national premier league one, on a regular basis.

It is why the whole region has hailed Lions's qualification. And that feels Ahiakpor with a lot of pride, except that he is fully aware the real challenge begins here.

History, in the form of the Blay Meizer-Eleven Wise story and the Goldfields experience, has taught us that finding the money to get a football team off the ground in a style as grand as this is possible. What the same stories also portray clearly is that sustaining them is damn difficult.

It would be wrong to suggest Goldfields is not a major player in Ghana football now but who can deny that the club is way off the status it enjoyed as Ghana's best club side in the first three years of the professional league?

So aware of that, Ahiakpor is doing everything he can to make this a long-term thing. He says: "I keep on saying to everybody that we are not here to challenge Hearts, Kotoko and the rest.

What we are here to do is to contribute our utmost best to the Ghanaian football scene. We play it fair, we would go into games with the confidence that we can win and as far as I am concerned, there is no way Heart of Lions would disappear from the scene anytime soon."

It appears the strategy for ensuring that would be same as what ensured premiership qualification. Employ the best personnel possible, motivate them well and success would follow as a matter of course.

In Lions' one and half years in existence, Ahiakpor has raised the club to a level many premiership clubs come nowhere near. A team bus might not be a good comparison but apart from Hearts, Kotoko and Goldfields, no team can match them in that regard.

On the technical front, their collection of coaches to date reads like 'who is who' in terms of Ghanaian coaches. Current Hearts coach Herbert Addo and former national coach E. K Afranie were the pioneers before former Goldfields coach Hans Van der Plun completed the job, with premiership qualification.

And while the Dutchman would naturally claim the plaudits for the feat, it is Afranie who deserves the most credit for their incredible rise because it was he who started it all and put in place the foundations.

It is now up to Plun to solidify it with premiership survival in mind. His first test is in Kumasi against another side that is likely to grab all the headlines this season, King Faisal of Kumasi.

At Plun's disposal on the field of play would be Hearts' African Cup winning captain Jacob Nettey, goalkeeper Eben Dida who has amassed several years of experience at the top level with Hearts and Eugene Addo, another ex-Hearts player who is seeking a route back into the local game after an unsuccessful professional stint in the lower division league of Germany. There are also a number of good young players the Dutchman can count on.

The eternal hope and wishes of all Voltaians, particularly Ahaikpor, would be that the blend of youth, experience and journeymen would guarantee the region a presence in the elite division for a long time to come.

When I meet Bawumia I'll tell him he's an economic comedian ...
28 minutes ago