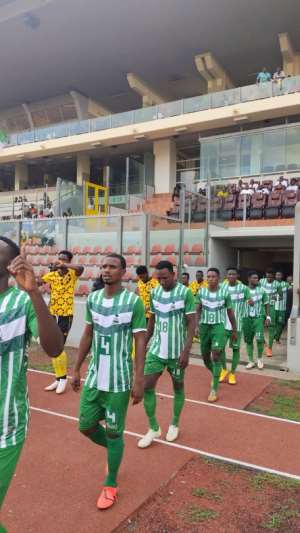 King Faisal have made it three wins out of three matches in the new Ghana Premier League season following a 2-0 win over regional rivals Ashanti Gold SC on Sunday afternoon.

The team in Kumasi before today had recorded two wins from the opening two matches of the 2021/2022 Ghanaian top-flight league campaign and rubbing shoulders with Asante Kotoko at the top of the league table.

Today, King Faisal was the less fancied side when the team hosted Ashanti Gold SC.

Unperturbed, the team set up strong and put up a good performance that thrilled fans throughout the 90 minutes.

In a game where neither side managed to score at the end of the first half, King Faisal made the chances they created in the second half count as the team scored through midfielder Enoch Morrison and striker Ibrahim Osman to cruise to a fantastic win at the end of the 90 minutes.