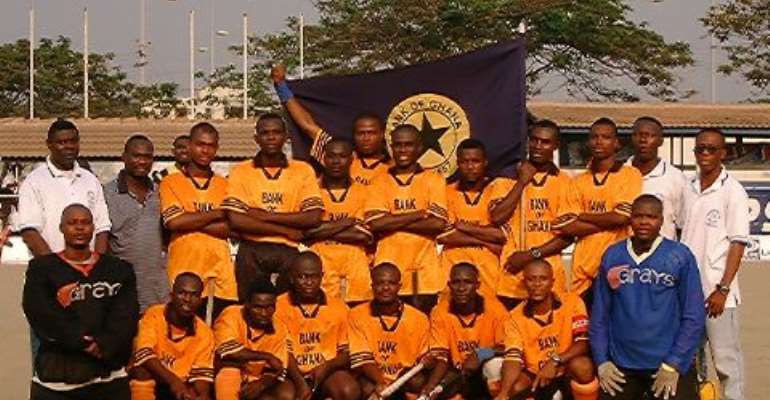 Exchequers of Bank of Ghana claimed their pound of flesh this afternoon when they beat rivals Trustees 3-1 in their epic champion of champions match at the National Hockey Pitch. The victory put them one game ahead of their rivals for the year 2002 and the bragging rights as to who rules Ghana hockey presently. In the end, it was the right mental attitude of the players as was proposed by the coaching staff that won the game for the Bankers.

The game started on a very fast note with Trustees losing possession just after push-off. Exchequers made an incursion into the Trustees area and a swift exchange saw Joseph Appiah finishing off the move with a slicing shot to stun the Trustees men in the very first minute of the match. Trustees tried to recover from the shock but were rather given another shock in the 3rd minute when defender Ben Tarley finished-off a penalty corner to take Exchequers 2-0 up. Trustees shook themselves from the potential damage and reorganized their midfield and defense. They were able to hold the Central Bankers in check but a slight moment of carelessness just on the stroke of halftime gave Appiah an opportunity to take his tally to 2 and Exchequers 3-0 up to end the first half.

Back from recess, the men from the Trust composed themselves and prepared for another sensational comeback, which has become their trademark. The battle was fought in midfield and the scoreline stayed 3-0 for much of the second half.

A bizarre incident that nearly marred the game occurred in the 15th minute of the hotly contested second half when Umpire number 2, George Mensah stopped the game and flashed the yellow card in the face of the Trustees captain and goalie Joseph Abaidoo for an offense that was not clear to the players and spectators alike. Umpire Mensah’s reason for invoking a temporal suspension on the captain was that some spectators he believed were for Trustees had hailed insults at him from the crowd. The game was held up for close to 30 minutes as Trustees threatened to boycott the game to register their protest at the decision. The Technical Table however reversed the decision and captain Abaidoo was reinstated for the game to resume.

The game lost a lot of its excitement from then with Exchequers recoiling to defend their 3 goal lead. Trustees took advantage of the slackened approach of the central Bankers and kept the heat on. Star of last week’s game David Ghablah was held in check all afternoon although he made some significant contribution. It took the persistence of Emmanuel Nartey to reduce the tally to 3-1 in the 49th minute when he sneaked through the defense of the Bankers to finish off a brilliant move.

Exchequers, who were awarded the Pepsi league trophy on the day thus celebrate as the super champions and the best in Ghana hockey as they look forward to another encounter with the elite in African hockey in March when they are billed to represent the country in the 15th Africa Cup for Club Champions in Pretoria, South Africa.

In the ladies division, Reformers claimed their second successive Pepsi league crown and champion of champions trophy while sensational Tema Juvenile Stars made their trainer Ebo Arthur proud with a 3-0 spanking of GAHA Babies to complete their dominance of the Greater Accra Hockey juvenile category.