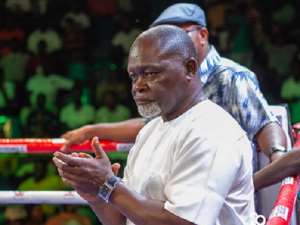 Boxing legend, Azumah Nelson, has charged the Ghana Boxing Authority (GBA) to report boxing promoter, Alex Ntiamoah Boakye, and his accomplices to the Police for further investigations and sanctioning for their misconduct on October 16 at the La Palm Royal Beach Hotel.

While condemning the behaviour of the top boxing promoter and his accomplices, Nelson said such acts had no place in Ghana boxing.

“Where from this behaviour, this is unacceptable; these acts of violence only destroy Ghana boxing,” the former WBC featherweight champion told Graphic Sports in an interview in Accra.

“These actions must be reported to the police and culprits charged for criminal offences, what is a fine of GHC5000, what can GHC5000 do to him, they will pay the fine and repeat the same offence again, the punishment should be harsher,” the former featherweight world champion told the Graphic Sports.

He maintained that he had no personal grudge against the culprits or the famous promoter but stated that wrong is wrong, hence such actions must be condemned.

“There must be sanity in boxing. We live in a country where there is the rule of law and we must all adhere to it; boxing is suffering because of persons with selfish interests,” he noted.

He, therefore, urged the newly elected GBA executives to be up and doing to help fight the rot in the sport.

Nelson’s harsh reaction followed a two-week ultimatum by the GBA to Mr Ntiamoah Boakye of Box Office Promotions to pay a fine of GH₵5,000 or risk suffering a one-year ban from the sport.

The promoter admitted the charge of misconduct following the melee on October 16 at the La Palm Royal Beach Hotel where he allegedly led thugs to assault some GBA executives.

The conflict arose over the ownership of the national middleweight title belt, which Mr Boakye claimed, was his bonafide property - a claim which was disputed by the GBA leadership. The ensuing furore nearly marred the Ace Power Promotions bill.

Adwoa Safo impersonation: Findings from our preliminary inve...
30 minutes ago

Acting Speaker Joewise throws out minority’s motion to overt...
45 minutes ago