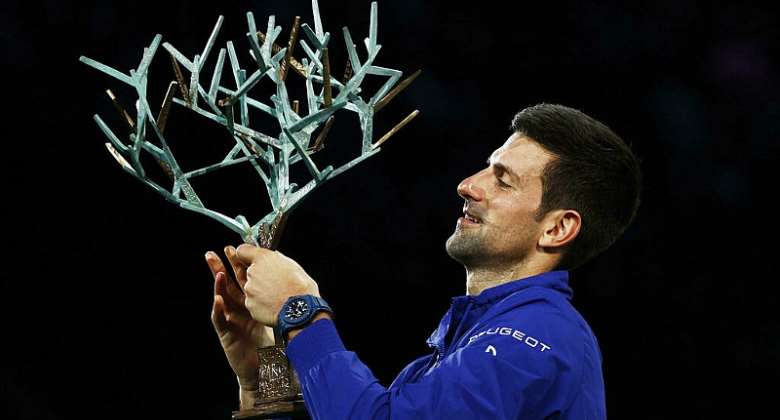 Novak Djokovic won a record-extending sixth Paris Masters crown on Sunday after coming from a set down to beat the second seed Daniil Medvedev.

It was a record 37th title for Djokovic at one of the nine Masters events which are the most prestigious tournaments on the circuit after the four Grand Slam events in Melbourne, Paris, London and New York.

The men, who last met at the US Open final in New York in September, traded early breaks and it was Djokovic who had a point to lead 4-2.

But Medvedev held on to square up matters at 3-3.
The 25-year-old Russian then broke Djokovic in the next game and edged to 5-3 after 34 minutes.

He notched up two set points when a Djokovic backhand went long and wrapped up the opener after 41 minutes when Djokovic's service return also flew long.

Style
Djokovic started the second set in some style. The 34-year-old Serb  hit the ball with more venom but he also had to defend more stoutly.

And those qualities came to the fore as he saved two game points to break Medvedev and lead 3-1.

He nursed his advantage without much ado until he served for the second set at 5-3 up.

He had to stave off break points on three separate occasions before levelling proceedings up at one set apiece with his fifth ace of the match.

The boisterous crowd, who often interrupted the players just as they were about to serve, was regaled with some stupendous shot-making as the two best men on the planet took chunks out of each other.

Chance
Djokovic broke to lead 3-2 in the decider and a slick service game soon put him 4-2 up.

Medvedev faltered again to give Djokovic the chance to serve for the match at 5-2. But he fluffed his lines.

However, Medvedev was also in mode munificence.
On match point, he allowed Djokovic to ensnare him in another lengthy exchange before Djokovic finished off the rally with a forehand winner down the line.

As the roars rose, the victor stood in the middle of the court with his arms wide to absorb the acclaim.

"It was a great match," said Medvedev in French. "It was a pleasure to play you ... we're having tough finals ... you win some and I win some ... I hope it continues like that."

And the magnanimity continued. Djokovic conceded he could not better Medvedev's level of French but nevertheless soldiered on with his compliments to the organisers and spectators.

No matter. He had bested his opponent where it counts.