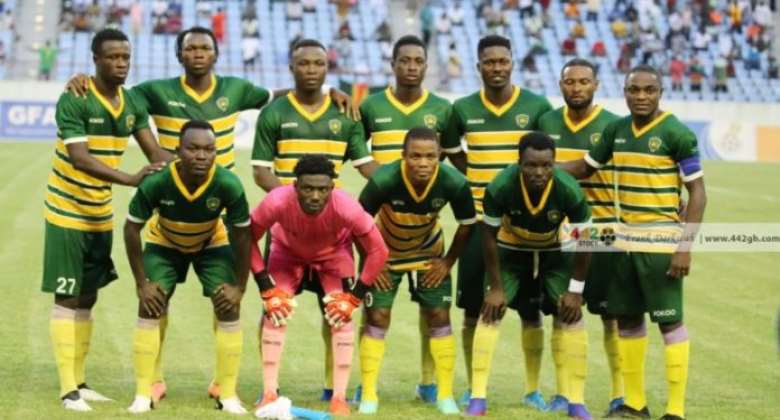 Relegated Ebusua Dwarfs FC have issued a legal warning to the Ghana Football Association [GFA] for including Ashanti Gold SC to participate in the 2021/22 Ghana Premier League season despite their alleged involvement in match-fixing scandal.

Ashgold and Inter Allies dominated the local and international media following the 7-0 scoreline in their matchday 35 games at the Len Clay Stadium.

The game was dragged into the gutters after Hashmin Musah, Inter Allies defender scored two own goals in the second half.

According to Hashmin, he was informed that officials of Ashgold have placed a bet on the game.

The Ghana FA has opened investigations into the matter together with Ghana Police Service but Dwarfs Ashanti Gold should be suspended from the new season.

“We have noticed that you intend to commence the 2021/2022 football season when issues on the 2020/2021 GFA league have NOT been dealt with especially an allegation of match-fixing made against Ashanti Gold FC and Inter Allies Football Club which is being prosecuted by the GFA at its Disciplinary Committee,” a letter from Dwarfs to Ghana FA read.

“According to Article 34(5)(a) of the GFA – Premier League Regulations 2019, (a) Any GFA or club official, or club, or player or participant of a match who instigates, commands, counsels, solicits, procures, or in any manner purposely aids, facilitates, encourages or promotes the playing of a fixed match or a match of convenience involving his club, or involving other clubs, the result of which may in one way or the other, affect his club, commits a grievous offence and the offender shall be referred to the Disciplinary Committee for appropriate sanctions.

“(d) Whenever the GFA or its Disciplinary Committee is satisfied that a fixed match or match of convenience has taken place between two clubs, the Committee shall in addition to any other sanctions provided under these Regulations, impose any of or a combination of any of the following sanctions on any club, official, member or player involved in the arrangement, preparation and/or playing of the fixed match, or match of convenience:

(i) A ban, either indefinitely or for a specific period.

(ii) A fine to be determined by the Disciplinary Committee

“We believe strongly that the league should not commence with this issue still pending however as a face saving gesture we urge you to ensure that neither ASHANTI GOLD nor INTER ALLIES participate in either the Premier nor Division One League until your promised verdict comes out,” the letter added.

The 2021/22 Ghana Premier League kicked off on Friday night with Accra Lions drawing with Elmina Sharks at the Accra Sports Stadium.

I’ll divorce my husband if he asks me for sex after three we...
1 hour ago