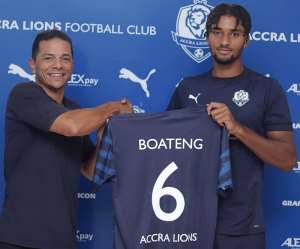 The club last season excelled in the National Division One League and as a result gained promotion to play in the top-flight league this season.

Ahead of the club’s opening game in the new season, they have today announced the acquisition of young midfielder Oscar Boateng to bolster the squad of the team.

“Last but not least, ALFC has the pleasure to welcome Oscar Boateng.

“The 18-year-old defensive midfielder joins us as a free agent from the United Kingdom,” Accra Lions have announced in a statement on their Twitter page.

Speaking on the latest signing, Paul Goodrich who is head of scouting at Accra Lions said, “Oscar’s playing style is visibly British. He will definitely increase the versatility of our game.”

Today, Accra Lions will play the first match of the 2021/2022 Ghana Premier League season in a game against Elmina Sharks at the Accra Sports Stadium.