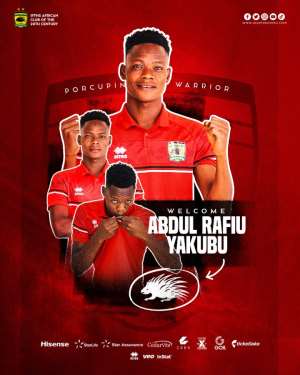 Kumasi Asante Kotoko have announced the signing of goalkeeper Abdul Rafiu Yakubu ahead of the new season.

The young shot-stopper signed a three-year deal until 2024.

The lanky goalkeeper has joined the Porcupine Warriors from Division One League outfit Wa Suntaa Sporting Club for an undisclosed fee.

Rafiu Yakubu had a stint with Division One League side Nkoranza Warriors SC before switching to join Wa Suntaa SC in the second half of last term.

He was one of the highly-rated goalkeepers in the Ghanaian second-tier league zone 1 with Wa Suntaa SC.

Meanwhile, Kotoko begin their journey for the 2021/22 Ghana Premier League with an away game against Dreams FC at the Theatre of Dreams at Dawu.