'I want to wear their jersey’ - Asamoah Gyan not giving up on playing for childhood club, Asante Kotoko 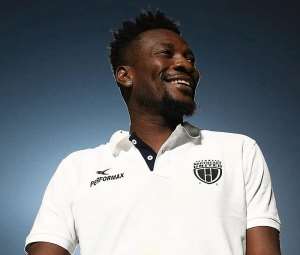 Ghana legend, Asamoah Gyan has re-echoed his desire to play for Asante Kotoko before he retires from football.

The 35-year-old returned to the topflight prior to the kick of the 2020/21 Ghana football season.

Gyan was strongly linked to Asante Kotoko but ended up signing a one year deal with Legon Cities.

The former Sunderland and Rennais striker struggled to make an impact at the club due to consistent injuries which forced him to make just seven appearances for the club.

However, Gyan said he hopes to play for Kotoko before he hangs his boots.

“Anything is possible. Asante Kotoko is my childhood club and I support them. I want to wear the jersey of Kotoko, even if it’s for one day I will be okay. I would be glad but I’ve to look at the body and my health first,” he told Otwinoko TV.

“If it is Kotoko or any other club, it will be fine but the most important thing is for me to be fit and ready again to play.”

The former Al Ain forward also noted that he was currently not in a position to play for any topflight side.

The former Black Stars skipper admitted that the injuries have taken a toll on him, insisting he aims to be fit by January to return to active football.

“Right now I am not active because of injuries. All these years, injuries have broken me down a bit. So I gave myself time off to check my body.

“By God’s grace, I’ll be back to action in January 2022. I just want to enjoy football because I can’t play football forever. Now I have some strength so I want to return to playing,” Gyan added.

Gyan is currently without a club. He remains the country's all-time top goalscorer.