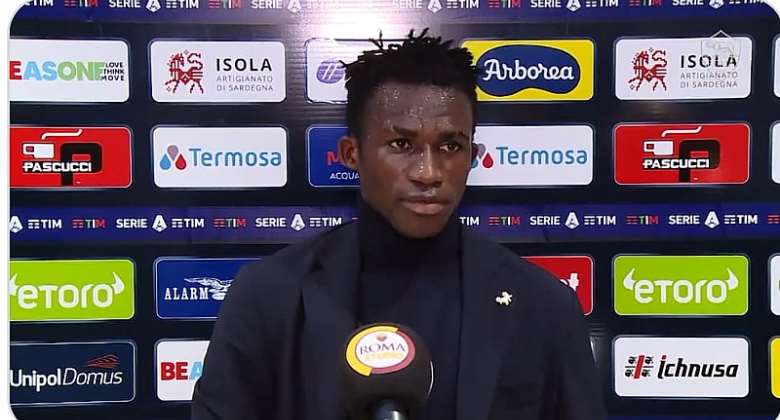 Ghanaian youngster, Felix Afena Ohene Gyan has spoken after making his debut for Serie A side, AS Roma.

Afena-Gyan made Jose Mourinho's side in their comeback win over Cagliari Calcio on Wednesday evening.

The 18-year-old who has been scoring for fun for the lower side of the club was introduced into the game in the second-half substitute as he came on after 57 minutes to replace Matías Vina when Roma was down by a goal.

Roger Ibanez and Lorenzo Pellegrini scored on the 71st and 78th minutes of the match respectively to turn the game around for the away team.

He scored six goals in the Italian Primavera for the reserve side of Roma which impressed Jose Mourinho to give him a chance with the senior team.

Afena-Gyan gave a superb account of himself as goals from Roger Ibanez and Lorenzo Pellegrini saw Roma clinch a 2-1 victory.

The promising attacking sensation couldn’t hide his joy after the game.

"I thank everyone and I dedicate my debut to everyone who has supported me and still supporting me," he said after the game.

"To the fans in Rome and my mother who is Ghana, I love you mom. My agent, my teammates and everybody," he added.

Gyan will be hoping to make more appearances in the top flight as he chases his maiden senior goal in Italy.

The win has sent Roma to the 4th position with 19 points and will play AC Milan this weekend.