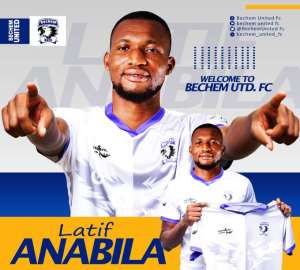 Ghana Premier League side, Bechem United have confirmed the signing of midfielder Latif Anabila on a season-long loan.

The lanky midfield dynamo joined the club from Asante Kotoko ahead of the 201/22 football season.

"We are glad to confirm the signing of Latif Anabila. The workaholic midfield Orchestrator joins us on a one-year loan deal from Tema XI FC," wrote the club on Twitter.

Anabila couldn't live up to lofty expectations at Kotoko and has been forced to leave after being declared surplus to requirement.

Anabila will be available for Bechem when they take on Medeama SC on the opening day of the season.

Bechem will begin their Ghana Premier League campaign in front of the fans at Nana Gyeabour Park against Medeama SC on Sunday, October 31.