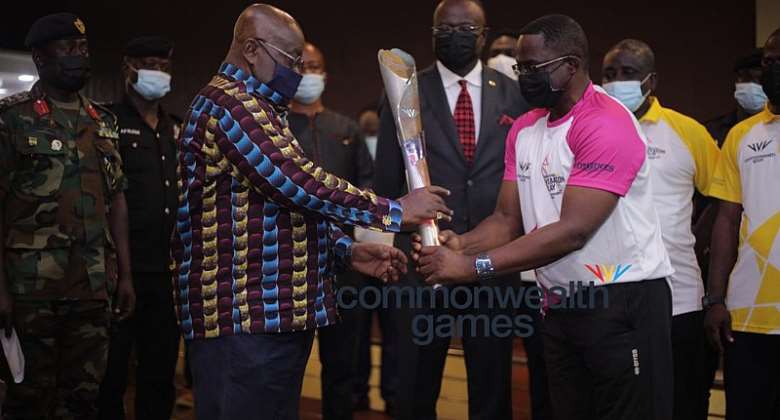 His Excellency President Nana Addo Dankwa Akufo-Addo, on behalf of the people of Ghana, received the baton of Birmingham 2022 Commonwealth Games which arrived in the country on Tuesday and expected to spend three days in the country.

The Games baton which will travel to all the 72 member states of the Commonwealth symbolizes linkages between the English speaking countries and territories and also begins the preparation of various athletes to participate in the 2022 Games.

The President was assisted by the Chief of Staff, Hon Akosua Frema Opare, Minister of Youth and Sports, Hon Mustapha Ussif, and his Deputy, Hon Evans Opoku Bobie, Director General of National Sports Authority, Prof Peter Twumasi, and President of Ghana Olympics Committee, Mr Ben Nunoo Mensah, who all took turns to exchange the Queen's Button and run for some distances. Other eminent personalities in sports also gathered at the Jubilee House, the seat of government.

'We will stand united to oppose e-levy' – Haruna Iddrisu but...
2 hours ago