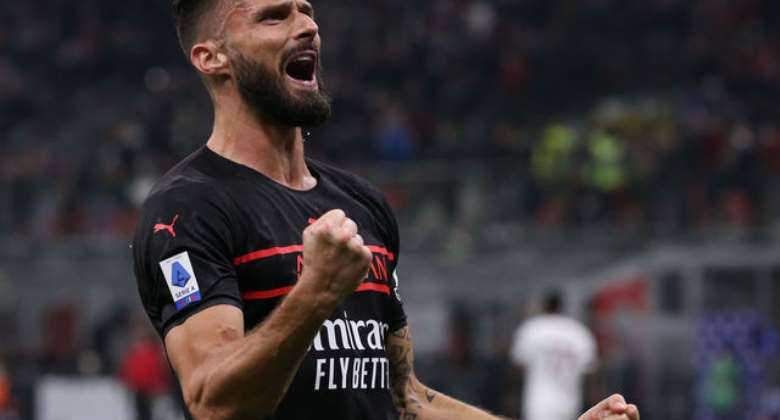 Olivier Giroud's fourth goal of the season proved decisive as AC Milan reclaimed their place at the summit of Serie A with a nervy victory over Torino at San Siro.

The Frenchman provided the brightest moment of a scrappy encounter when, on 14 minutes, he slotted in at the far post after Rade Krunic flicked on Alexis Saelemaeker's corner delivery.

Milan struggled to get into their stride but proved a danger from set-pieces and Krunic went close to giving the hosts a scarcely deserved two-goal lead on the stroke of half-time when his glancing header dropped just wide.

Not for the first time this season, Torino battled well against one of the so-called 'big clubs' but ultimately lacked the quality to match their endeavour.

When the visitors finally pierced together a threatening attack, the returning Andrea Belotti scuffed his finish.

Their best chance of the night fell to Antonio Sanabria who, after being played through behind the Milan defence, was repelled by goalkeeper Ciprian Tatarusanu, while substitute Dennis Praet's deflected effort bounced off the woodwork.

Torino threw everyone forward to contest a corner deep into stoppage-time, including goalkeeper Vanja Milinkovic-Savic, but Sanabria failed to make the connection with the goal at his mercy.

So the Rossoneri would hold on for their eighth win of the season, and they now have 28 points from a possible 30 after their first 10 games.

It means Milan have a three-point gap at the top of Serie A - at least until Thursday when unbeaten Napoli host Bologna.