'Remember, this too shall pass' - ICGC consoles members who are Man Utd fans after shocking defeat to Liverpool 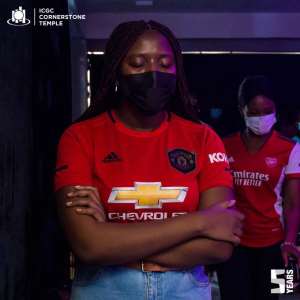 The International Central Gospel Church (ICGC) of Ghana has consoled its members who support Manchester United.

This comes after the Red Devils shocking 5-0 defeat to Liverpool on Sunday at Old Trafford over the weekend.

Naby Keita broke the deadlock with an assist from Mo Salah.

Salah, who has been on an impressive run grabbed a hat-trick with Diego Jota also scoring to ensure Liverpool pile more misery on Manchester United.

In a post on Twitter, the church used a photo of a sad Manchester United fan to urge its members to remain steadfast.

“If your Sunday was tearful, we wish you a happy Monday. Remember, this too shall pass!” the church tweeted.

In the aftermath of the game, several Manchester United fans took to social media to call for the sacking of manager Ole Gunnar Solskjaer.

However, multiple reports in the UK suggest that the Norwegian trainer will still be in charge of the club despite earlier reports suggesting that the hierarchy of the club are considering sacking him.

FIFA throws out SAFA’s protest case against Ghana after WC q...
26 minutes ago

Appropriate adequate funds for establishment of Ghana’s CDC ...
32 minutes ago