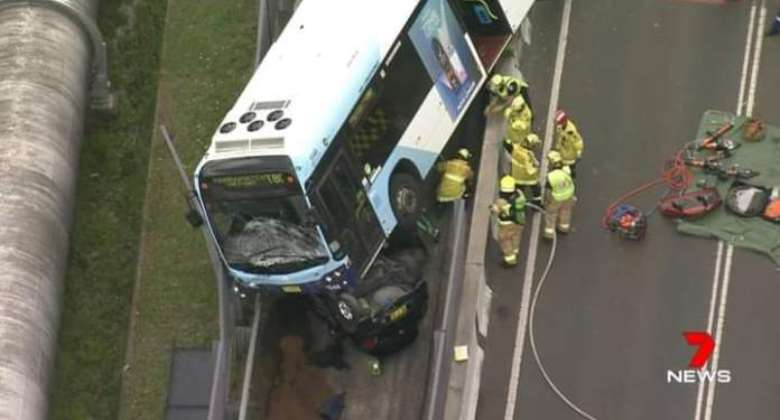 Newly promoted Ghana Division One League side, Baffour Soccer Academy has been involved in a serious car accident on the Accra-Kumasi road on Monday evening.

The club which is based in Nsoatre, a suburb of Sunyani, according to reports were heading to the capital for their pre-season tour ahead of the start of their maiden participation in the Division One League.

However, the sad and unfortunate incident happened after their bus veered from its lane to collide with another bus coming from Accra to Kumasi.

No one has died, according to eyewitness, even though the club’s head coach is reported to be in critical condition while the communications director has reportedly broken his leg.

“The driver of the Baffour Soccer Academy veered from his way and collided with another bus. I’m sure he was new on the road,” an eyewitness told AshesGyamera.com.

“We were able to save the lives of the players with the exception of coach of the club, one player and another man whom we were later told that he is the communication director.

“The coach was trapped in the car and it took the intervention of the police and Fire service to come and save him. so far, nobody has been confirmed dead and we are praying that nobody will die,” the eyewitness added.

The Academy Boys defeated Kato Freedom Fighters 2-0 at the Sunyani Coronation Park earlier in October to secure qualification to the Division One.

The Ghana Division One League is scheduled to commence on November 12, 2021.

Baffour Soccer Academy is owned by Hon. Ignatius Baffour Awuah – Minister of Employment – boasts of over 65 players in the U15 and U17 Division with several others in the U10 and U13 divisions.

The club boasts of two pitches, one for training and one for matches, modern dressing rooms, two-storey buildings used as hostels, a swimming pool an entertainment room, a restaurant, and 6 unit classroom.