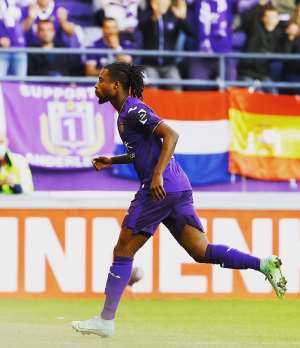 Ghana international, Majeed Ashimeru has expressed his joy after scoring his first goal of the season for RSC Anderlecht over the weekend.

The Black Stars asset on Sunday afternoon missed out on a starting role when his team hosted Beerschot VA at the Lotto Park in a matchday 12 encounter of the 2021/2022 Belgian Jupiler Pro League season.

Having been introduced in the 75th minute to replace Krsitoffer Ollson, Majeed Ashimeru glittered with his performance and went on to find the back of the net of the visitors just three minutes later.

Speaking after sealing a 4-1 win for RSC Anderlecht against Beerschot VA, the Ghana midfielder says he is delighted with his first goal of the season.

“I’m very elated to have registered my first goal of the season.

“Thanks to my colleagues and the fans for the continuous support!!

COVID-19: Government to announce more measures ahead of Chri...
56 minutes ago