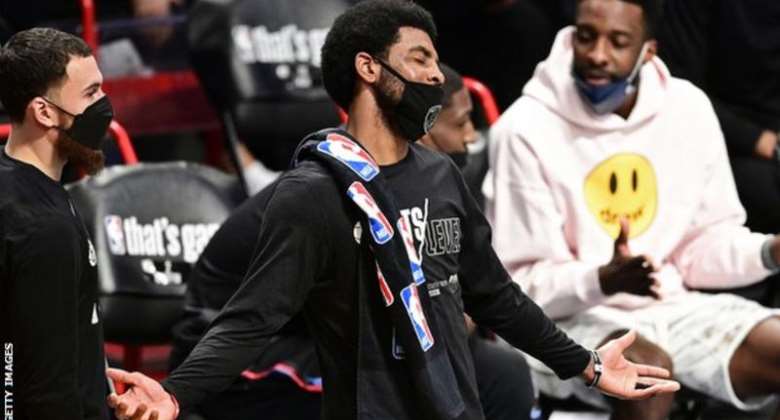 Anti-vaccine demonstrators gathered outside the Barclays Center on Sunday to show their support for Brooklyn Nets guard Kyrie Irving before his team's NBA home opener.

Irving has refused to get vaccinated against Covid-19 and is not allowed to play or practice with his team until he does so because of local vaccine rules.

Some protesters broke through barriers outside the arena before being confronted by security.

No arrests or injuries were reported.
"Barclays Center briefly closed its doors today in order to clear protestors from the main doors on the plaza and ensure guests could safely enter the arena," a Barclays Center spokesperson said in a statement.

"Only ticketed guests were able to enter the building and the game proceeded according to schedule."

The beginning of the new NBA season has been dominated by debate over the Covid-19 vaccine, with some players saying they will not get jabbed and others refusing to confirm their vaccination status.

Irving has recently shared microchip claims about the Moderna vaccine on social media and admits to being a "big conspiracy theorist."

Without Irving, the Nets blew a half-time lead and lost 111-95 on their home return as Charlotte Hornets won their third game in a row.

Miles Bridges scored a team-high 32 points, one shy of his career-best, as the Hornets moved to 3-0 - their best ever start to a season.

The Nets' Kevin Durant led all scorers with 38 points as his side dropped to 7-3 in home openers since moving from New Jersey in 2012.

"We definitely want Kyrie Irving out here on the floor and he's a huge part of what we do, but it's not happening right now," Durant said after the game.

And the Boston Celtics beat the Houston Rockets 107-97 to earn their first win of the season, with Jayson Tatum scoring 31 points and Grant Williams scoring 18 off the bench.