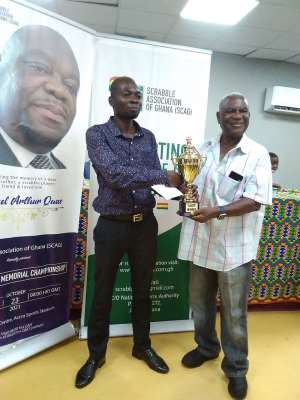 Mr Charles Techie Menson retained his position as the current Best Scrabble player when he won a keen contest in memory of the late Michael Arthur Quao at the Accra Sports Stadium last Saturday.

He had seven wins out of eight games in the competition involving 22 experienced players.

The event was organized by the Scrabble Association of Ghana (SCAG) on Saturday, October 23, 2021, at the media centre of the Accra Sports Stadium.

President of SCAG, Mr Haruna Adamu commended the players and urged them to spread the gospel of Scrabble to attract more players.

He said the late Micky Quao was a rock behind SCAG, having won four national titles and rising to become a coach of the National team.

"The SCAG has two tournaments coming up, the National open and West African Championships and the president appealed to companies to support their activities" he revealed.

He announced that Inter clubs competitions will be encouraged to sharpen the skills of players.

Architect S. M. Quartey, a patron of the Association commended all the players and advised the players to learn. He encouraged more young people to start playing Scrabble in Ghana.

Secretary of SCAG, Ms Christine Ashley told Yours Truly the Micky Quao Memorial championship will be an annual event to honour the great member.