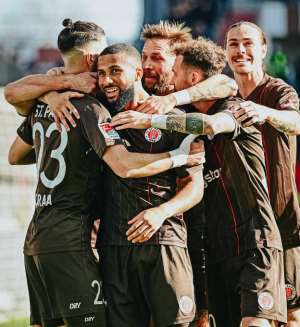 Ghana international, Daniel-Kofi Kyereh has been rated highly after his top performance for FC St. Pauli in the team’s 4-0 mauling of Hansa Rostock in the German Bundesliga 2 today.

The attacker has been in scintillating form since the 2021/2022 football season commenced and is currently one of the top players fueling his team’s charge to secure promotion to the top-flight league.

In a matchday 11 encounter of the German Bundesliga 2 today, Daniel-Kofi Kyereh started for St. Pauli and showed yet again why he is so important for the side.

His creativity was exceptional on the matchday as he went on to score with a fantastic effort in the 18th minute after Jackson Irvine had already shot St. Pauli into a deserved lead six minutes earlier.

Going on to play 82 minutes of the game against Hansa Rostock, Daniel-Kofi Kyereh exited with a rating of 7.8 per the statistics recorded by SofaScore.

Before his substitution though, he was instrumental for FC St. Pauli as the club scored two additional goals through Guido Burgstaller and Simon Makienok to lead 4-0.

His goal today means that Daniel-Kofi Kyereh has now had a direct hand in 10 goals of his team this season.

He has three goals to his name and has also provided seven assists after making 11 appearances in the German Bundesliga 2.

COVID-19: Government to announce more measures ahead of Chri...
31 minutes ago