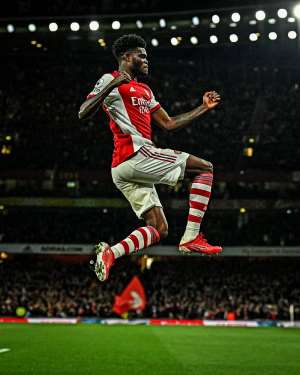 Thomas Partey has become the first Ghanaian player to score for Arsenal.

The 27-year-old midfielder netted his first goal for the Gunners against Aston Villa on Friday night at the Emirates Stadium.

Partey headed in Emile Smith Rowe’s corner after hitting the crossbar earlier to break the deadlock for the Gunners.

Emmanuel Frimpong and Quincy Owusu-Abayie both played for the club but the former Tema Youth midfielder has become the first Ghanaian to score for the club.

According to the Premier League, African players have contributed a total number of 219 goals for the club.

After joining the Premier League side last summer from Athletico Madrid, the midfield dynamo endured a torrid season due to injuries.

Despite missing out on the first three games from the start of the season due to injuries, Partey seems to have rediscovered his form.

The all-important win has moved Mikel Arteta's side into ninth place on the Premier League table.

Partey, however, enjoyed the full 90 minutes of the game.