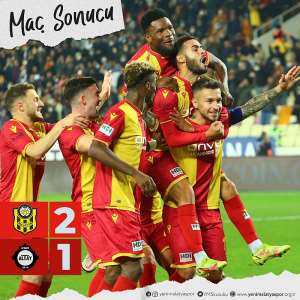 The striker since the start of the 2021/2022 football season has displayed outstanding form and is currently one of the best players in the team.

Today at the Yeni Malatya Stadium, Benjamin Tetteh as expected earned a starting role upfront for his team as they chased a win from the home match against the opponent.

With neither team scoring in the first half, the Black Stars striker resumed from the break with renewed energy as he equalized with a fantastic effort in the 57th minute.

Going on to impress, the Ghana attacker was also involved when his team won a penalty kick in the 68th minute.

Adem Buyuk accepted the responsibility and scored to increase the lead for Yeni Malatyaspor.

Going on to play 86 minutes of the game, Benjamin Tetteh bowed out with a rating of 7.0 for his efforts.

With his goal today, Benjamin Tetteh has scored five goals this season after playing in nine matches in the Turkish Super Lig.

He has gradually this season crawled his way into the Black Stars team and should be one of the players that will be invited for the final hurdle in the group stage of the Africa qualifiers of the 2022 FIFA World Cup.