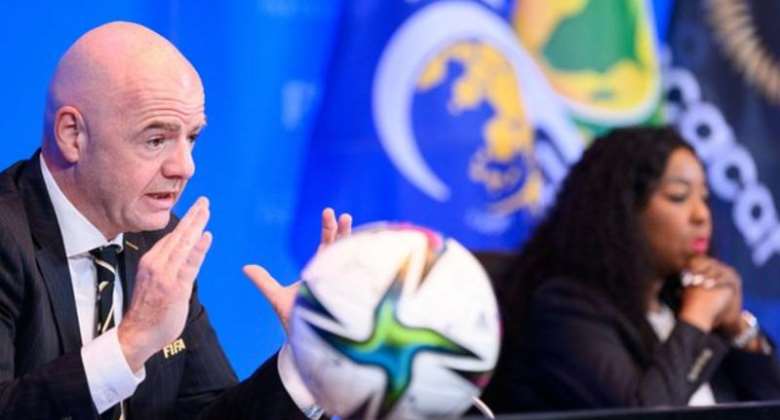 The threat of a boycott by European countries should the World Cup be held every two years was not discussed at a Fifa meeting on Wednesday, the body's president Gianni Infantino says.

More than a dozen European nations are reportedly considering quitting Fifa if the tournament is played biennially.

"Discussions were heated but they were positive," said Infantino.

The Swiss hopes "common consensus" will be found when the issue is discussed again at a global summit in December.

On Tuesday, Infantino spoke to European football leaders in a private conference call and the plans were roundly criticised by the 55 Uefa member associations.

The Fifa Council - the main decision-making body consisting of 37 elected representatives - then met on Wednesday and the plans for a new international match calendar were discussed.

"The debate has been and will probably continue to be heated," said Infantino. "I understand being passionate myself about football that you can have different opinions.

"We have received some legitimate criticism and some enthusiastic comments as well.

"It is so important for everyone to make their voice heard. Boycotts were not discussed today.

"I am confident on 20 December we will be able to present a common solution."

Infantino said he did not know what any agreement would look like and did not confirm if a vote would be held at the summit.

It seems unlikely any decision will be made there, with Infantino suggesting the proposals face a drawn-out debate before being agreed, revised or thrown out.

"For me, everything is open. It is not my proposal or decision," he said. "I have to facilitate the dialogue and bring everyone together."

The plan to hold both the men's and women's World Cups every two years, instead of four, is being considered for "sporting motivations, not financial ones", said Infantino, who added that football must "rethink the way it is structured globally" in order to ensure younger audiences are not turned away.

"It is about our children and making sure they continue to fall in love with the game," he said.

Former Arsenal boss Arsene Wenger, who is chief of global football development at Fifa, is a key supporter of the proposals and has been speaking to numerous stakeholders in an effort to win support.

A feasibility study and economic assessment of the financial impact of the move are expected to be delivered before December's summit.

"I believe in working together we will come with something positive. Maybe it is a staged process, one step forward and one step back, or half a step or two steps," said Infantino in a news conference after Wednesday's Fifa Council meeting.

"I understand it is difficult for people to change things. We are here in good faith to work very hard to try and do something that is good for football."

Infantino said under the plan the men's and women's World Cups would be held alternately, meaning a tournament would be played every year.

Tournaments hosted by a single country are also likely to be "a thing of the past", he added.

"One country to take up the burden of organising a World Cup on its own is over.

"We know we can bring joy and unity, bring jobs to more than one country and we're not asking one country to bankrupt itself."

Meanwhile, Infantino confirmed the 2021 Club World Cup - which will feature European champions Chelsea - will be played in early 2022 and take place in the United Arab Emirates.

Last month, Japan pulled out of hosting the tournament in December because of Covid-19 restrictions in the country.