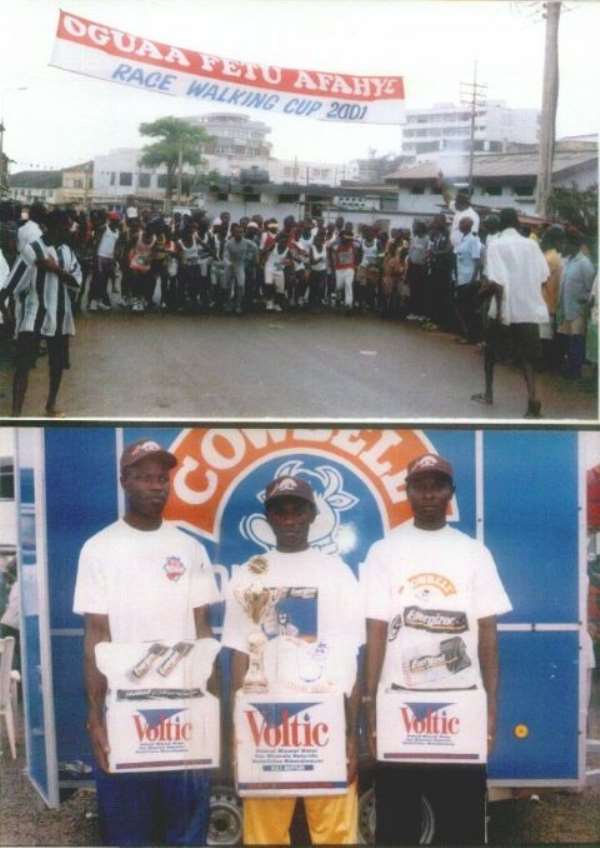 Two race-walking Nigerians Odunga Oluwole and John Ayodele Olugbenga are just set to arrive from their native Nigeria to Ghana on September 3, 2002 to participate in the upcoming Oguaa Fetu Afahye 20k walk (6th edition) due to be held on September 6, 2002. The invitation is on behalf of VISCO WALKING CLUB through the Athletes Representatives of Athletics Federation of Nigeria (AFN) which is said to hold a membership of over 2000 athletes. The invitation of these two racewalkers from across the Ghanaian borders gives the WALK an international flavour, during which participants will share ideas on a wide range of topics regarding the sport. Both Oluwole and Olugbenga share good times of 1:4:56 and 1:43:46 respectively over 20 kilometres. The former is aged 20 years and weighs 61 kilogrammes, while the latter is aged 22 and weighs 68 kilogrammes. Cape Coasts Savoy Hotel is footing the bill for their boarding and lodging for the whole of their 5-day stay. In a chat with Savoy Hotel Manager Mr. Pele Dekwoski, the hotel has been contributing in diverse ways towards the growth of the sport and therefore his institution, would continue to provide whatever support it takes to bring most especially foreign competitors into the country, for Ghanaian walkers to have a feel of foreign competition. Meanwhile, last year’s winner over the distance Ahmed Tijan Sani of Ghana Armed Forces (NAVY) Takoradi has stated that he is hoping that his employers will release him early enough him defend his title. At the moment registration is still on-going at Savoy Hotel Cape Coast, Sports Stadium Cape Coast and at the Oguaa Traditional Council for ¢5,000. As usual among the sponsors for this sixth edition are Parlays Biscuit, Cowbell, Biriwa Beach Hotel, Energizer , ALITALIA, VOLTIC and Savoy Hotel. Attached is a picture of last year’s list of first three winners. They are namely Ahmed Tijani Sani (middle) 1st, Stanley Briamah (left) 2nd, and Eric Nuamah (right) 3rd.