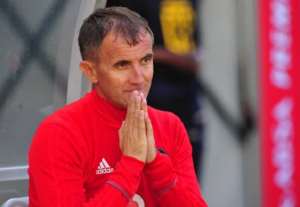 The Gqeberha (formerly Port Elizabeth) Regional Court sentenced him to two separate three-year jail terms, both of which have been suspended for five years.

The Serbian coach, who was in court to hear the verdict, has immediately appealed the ruling and strenuously denies the charges against him.

"It was only fitting to put an application for the leave to appeal the judgement, which I believe was erroneously arrived at," Micho said in a statement.

"I had no doubt in my mind that the criminal justice system of South Africa is objective and sober. My belief has not been tainted."

A short statement by Uganda's football federation (Fufa) indicates that the 52-year-old will carry on his duties with the Cranes despite the findings.

"Uganda coach Sredojevic asked Fufa for permission to attend to a private matter in South Africa," it read.

"We have this afternoon received information that the private matter has been concluded for now.

"The coach will come back to resume his duties accordingly."

The incidents happened in December 2020 while he was coach of the Zambian national team and was in South Africa to watch the regional Cosafa Under-20 Cup.

"On 7 December 2020 during the Cosafa Games in Gqeberha, a 39-year-old woman was delivering coffee at the Wolfson Stadium when she asked Sredojevic if he would need sugar with his coffee," a statement from the court read.

"He said no and added that he needed another type of sugar, pointing at her private parts. She complained about his conduct to her boss who in turn warned Sredojevic not to do it again.

"Later on that day, the lady again went to deliver coffee at the same stadium and this time Sredojevic touched her in an inappropriate manner."

Micho had denied the charges surrounding the two incidents.

The court statement further outlined the sentences handed down to the coach:

"For count one, he was sentenced to three years imprisonment which was wholly suspended for five years on condition that he does not again contravene section 5(2) of the Sexual offenses Act," it explained.

"This section entails sexual assault in the form of inspiring a belief unto the complainant that he or she will immediately be sexually assaulted.

"For count two, Sredojevic was also sentenced to three years imprisonment which was wholly suspended for five years on condition that he does not again contravene section 5(1) of the Sexual offenses Act.

"This section entails sexual assault in the form of touching a complainant."

Next month, Micho will try to lead Uganda to the third and final round of African qualifying for the 2022 World Cup in Qatar.