2022 AwconQ: ‘Everyone is in a competitive mood’ – Nigeria's Oshoala talks tough ahead of Ghana clash 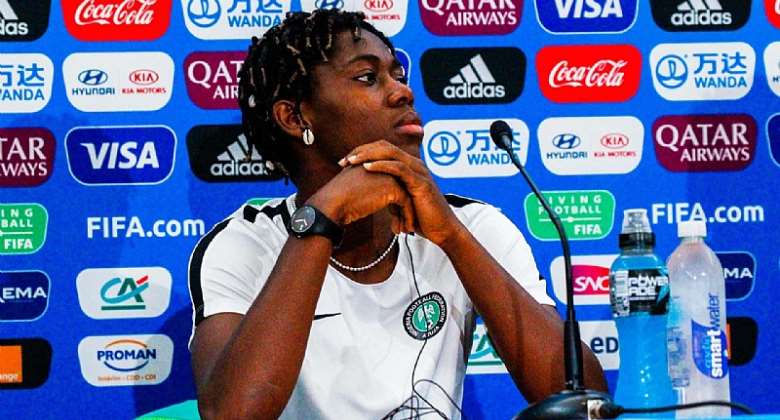 Asisat Oshoala has spoken of how the Nigeria women's team are in a competitive mood for Wednesday’s Africa Women’s Cup of Nations qualifier against Ghana.

In the first round, first leg encounter billed for the Mobolaji Johnson Arena in Lagos, the Super Falcons would be hoping to get an impressive result in order to make the return leg a formality.

And the Barcelona star – who is expected to lead the Nigerians’ charge for goals – claimed her teammates will put in their best towards making the fans happy.

“Good be with the girls again, everyone is in a competitive mood and we are ready for the game against Ghana [on Wednesday], hoping to give our best,” Oshoala said on Super Falcons Instagram handle.

Some fans are cynical about the chances of Randy Waldrum’s women following their poor showing at the Aisha Buhari Cup – where they crumbled against South Africa.

Nevertheless, Oshoala stated that should not be used as a yardstick to judge the team as the friendly tournament was used to try out new tactics and players.

“To be honest, I don’t really see something bad that happened because it’s a friendly tournament and also, we were preparing for this particular game [against Ghana],” she continued.

“It’s only normal for the coaches to try their patterns, try their teams and other stuff to get a good team ready for Ghana.

“I get the emotional stuff from the fans – they want us to win and all of that being at the best level it’s a process.

“You don’t get to win all your games. You lose some and that’s how to learn. If we win every game, we might not know where to make proper corrections.

“For us, the Aisha Buhari Cup was a good tournament, and we hope to make the fans happy against Ghana.”

Unlike Mercy Tagoe-Quarcoo’ Black Queens who missed the biennial African showpiece in 2012 (Equatorial Guinea), the Super Falcons have not missed an edition since its inception in 1991.

Nigeria are reigning African queens having won the 2018 edition staged in Ghana. In the final, the West Africans silenced South Africa 4-3 on penalties after scores stood at 0-0 after extra time.