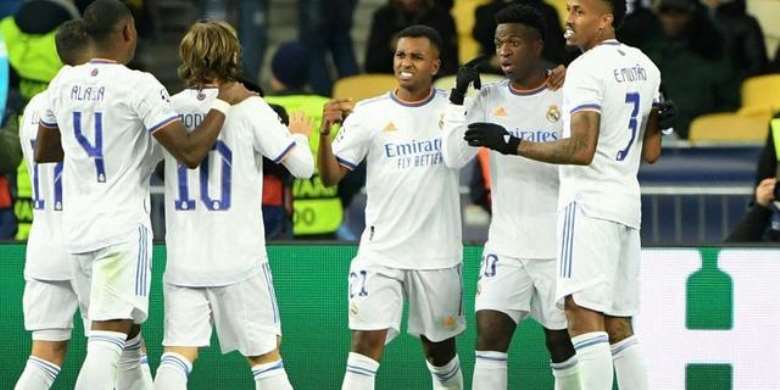 Real Madrid emphatically bounced back from defeat to Sheriff Tiraspol three weeks ago with a 5-0 win over Shakhtar Donetsk at the Olympic Stadium in Kiev.

Three goals in 15 second-half minutes saw them overpower their hosts, who are still winless in Group D, but it was a dominant display ahead of El Clasico against Barcelona this weekend.

Karim Benzema led the line superbly throughout, and he tested young Shakhtar goalkeeper Anatolii Trubin with an early sighter.

Toni Kroos, Rodrygo and Vinicius Jr also threatened, but the visitors were only carving out chances in spurts early on.

It was an open first half, and Shakhtar gave as good as they got. Manor Solomon had the beating of Lucas Vazquez down the right. He was involved in a move which saw Eder Militao intervene to clear Ismaily's cross before it reached Tete in the area.

Los Blancos went ahead with eight minutes remaining of the first half. Serhi Kryvtsov sliced Lucas' pass, aimed for Benzema, into his own net and past a helpless Trubin.

As Rodrygo and Benzema pressed for a second before the break, it was imperative Shakhtar stayed compact.

By the hour mark, though, the game was as good as done. Vinicius was the standout man for Real, and he grabbed a sumptuous brace.

First, Luka Modric picked him out with a perfect first-time pass, leaving him free to dink over Trubin, but then he did all the hard work himself for the second. Twisting and turning, he found his way into the area, before lashing the ball into the roof of the net.

Natutally, the game hit a lull after that, but there was still time for Benzema to get in on the action in stoppage time.