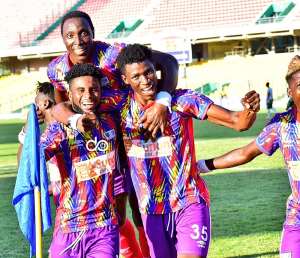 Hearts of Oak 2nd leg tie of the Caf Champions League tie against Wydad Athletic Club in Casablanca will be staged behind doors.

This was confirmed by the continent's football governing body, Caf on Tuesday.

The Moroccan club will host the Ghana Premier League champions at the King Mohammed V Sports Complex in Casablanca, and the 67,000 capacity seating stadium will have zero fans in attendance.

Hearts of Oak go into the encounter with a slight advantage, after beating their Moroccan counterparts 1-0 in Accra in the first leg, and seem to have a further advantage after CAF’s ruling which was inspired by the precarious nature of Morocco’s covid-19 situation.

The return leg will be played on October 24.
Samuel Boadu and his charges will leave the shores of Ghana on Thursday with a chartered flight.

The game has been scheduled to kick off at 19:00GMT on Saturday.