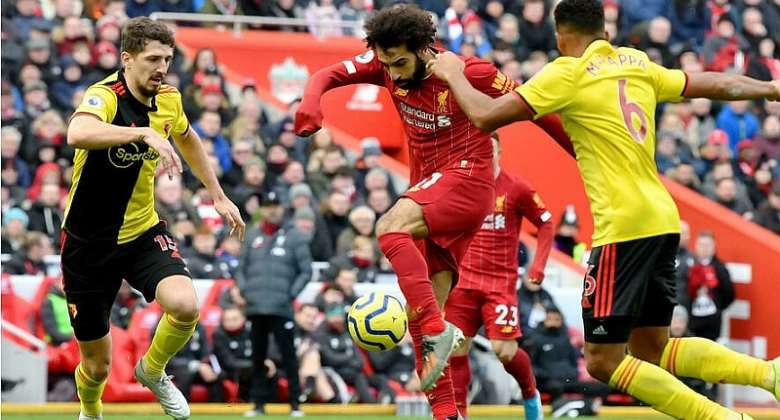 Liverpool star Mohamed Salah equalled the Premier League goals record for an African when he scored in a 5-0 rout of Watford at the weekend.

Salah showed why he is one of the most in-form players in the world with a stunning solo effort as he danced between four defenders to score for the eighth consecutive game.

Mane became just the third African player to score 100 Premier League goals after Drogba and Salah as Liverpool overwhelmed Watford. Salah was the provider for Mane's landmark effort with a brilliant pass for the Senegal attacker to slot home his sixth goal of the season.

Zambia forward Daka grabbed his first Leicester goal as the Foxes inflicted more misery on Manchester United with a 4-2 win. Daka has played just 39 minutes of Premier League football since his mid-year move from Salzburg, but made his mark off the bench with the final goal of the game in stoppage time as he tapped home at the back post from a free-kick.

The Senegal goalkeeper repelled a late Brentford barrage to secure a 1-0 win. The European champions needed Mendy to make three stunning saves to hold out for a victory to take them back to the top of the table. "He's a world-class goalkeeper and is the one we've got to thank," said Chelsea manager Thomas Tuchel.

The Nigeria forward scored his fifth Serie A goal of the season as Napoli defeated Torino 1-0 to maintain their perfect start to the season. Osimhen headed in after 81 minutes, making the most of an attempted clearance that ricocheted off team-mate Eljif Elmas. "It was the most important goal of my career," said Osimhen. "The atmosphere at the stadium was incredible. The fans pushed us forward and we managed to get the three points."

Fresh from his international debut, the Nigeria forward bagged his fourth goal in three games to hand Union a surprise 2-0 win over Wolfsburg. The home crowd sang Awoniyi's name after he put Union ahead just after half-time by scoring his sixth league goal this season. "He is our life insurance", said goalkeeper Andreas Luthe.

Togo striker Bebou opened his Bundesliga account for the season with two goals in Hoffenheim's 5-0 thrashing of Cologne. Bebou scored in the first half and doubled the lead after the break with a neat backheel to send Hoffenheim on the way to their second-highest Bundesliga victory.

Ivory Coast defender endured a torrid afternoon at the back as a young Leverkusen side were put to the sword by league leaders and reigning champions Bayern Munich. Kossounou and his teammates were powerless to stop Bayern's marauding front line in the first half, as Robert Lewandowski, Thomas Mueller and Serge Gnabry smashed in four goals in seven minutes. The 5-1 win sent Bayern back to the top of the table.

The Ghanaian teenager scored a magnificent solo goal to take his haul for the season to four in a 3-0 victory at Metz. Sulemana, who started both World Cup qualifying wins over Zimbabwe, poked the ball through the legs of a defender before smashing in via the crossbar as Rennes put the game out of reach by half-time.

The Angola-born Democratic Republic of Congo defender bagged his first Ligue 1 goal to give promoted Clermont a memorable 1-0 win over reigning champions Lille. N'Simba crashed home a powerful low drive from 20 metres to end a run of seven games without a victory for his side.