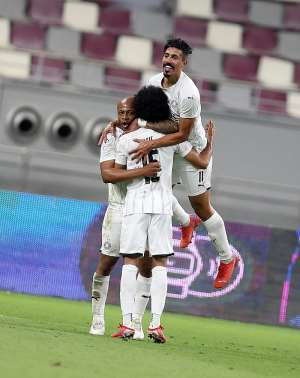 Ghana captain Andre Ayew scored for his Al-Sadd SC outfit on Sunday afternoon to help the team to defeat Al Gharafa 6-4 in the Qatari Stars League.

The experienced attacker prior to the international break displayed impressive form in front of goal after scoring in four successive matches for his club.

With a goal in two matches for the Black Stars in the 2022 FIFA World Cup qualifiers, Andre Ayew has returned to Al Sadd SC to continuing that outstanding goal-scoring form.

In a game against Al Gharafa, the forward hit the back of the net with a stellar effort in the 89th minute to seal a delightful 6-4 win at the end of the 90 minutes.

On the matchday, a brace from Baghdad Bounedjah, plus a goal from Hassan Al-Haydos, and two own goals from Saeed Alhaji Essa and Saifeldeen Fadlalla powered Al Sadd SC to the win against Al Gharafa.

With today’s goal, Andre Ayew has now scored in five successive matches for his club.

'We will stand united to oppose e-levy' – Haruna Iddrisu but...
17 minutes ago