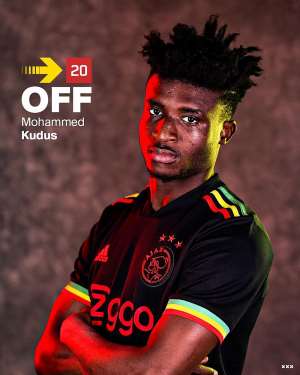 Young sensation Mohammed Kudus started for Ajax in the game against Heerenveen on Saturday afternoon following his starring role for Ghana in the international break.

The attacker for months had to watch from the sidelines as his club battled in the Dutch Eredivisie and the Uefa Champions League.

Prior to the October international break, he finally enjoyed some action on the grass having fully recovered from an injury setback.

Subsequently, he played in Ghana’s double win over Zimbabwe in the 2022 FIFA World Cup qualifiers and even emerged as the star man for the Black Stars.

Returning to Ajax this weekend, his manager Erik ten Haag who had monitored his performance in the national team decided to give him his first start in months.

Mohammed Kudus presented with the deserved chance did not disappoint as he impressed in the 63 minutes he played against Heerenveen today in the Dutch Eredivisie.

For his outing, the Ghana star merited a high rating of 7.5 according to the data recorded by renowned statistics firm SofaScore

On the matchday, Ajax collectively stepped up to fight for the victory against the hosts. Striker Sebastien Haller equalised after 24 minutes with an assists from Dusan Tadic to shoot the visitor into the lead.

Later in the second half, attacker David Neres who was introduced as a substitute scored in the 75th minute to seal the win for Ajax.