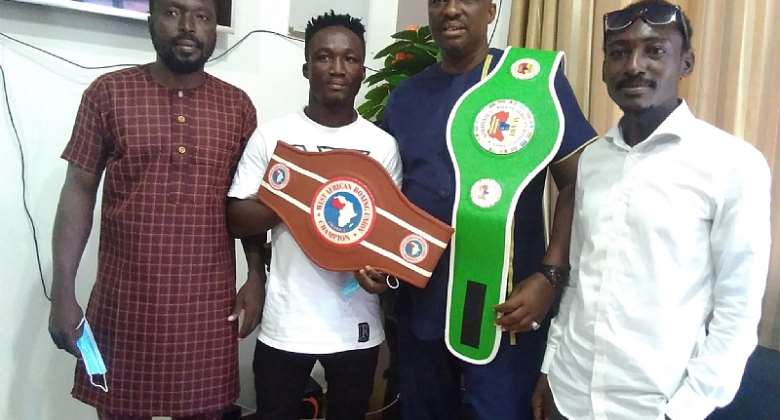 The new Champion praised President Abraham Kotei Neequaye for his support towards the Gyms and his vision to change the face of boxing in Ghana by getting more world champions.

Manyo Plange was accompanied by his local manager Ahmed Samed.

He said the world bantamweight title is his current target and wants to meet any of the champions at WBC, WBA, IBF and WBO.

The GBA President, Mr Abraham Kotei Neequaye said previous presidents have been able to win 10 world champions and he hopes to add more before his term is over.

He assured the boxing fraternity of transparency, accountability and opportunities for the best professional boxers.

He revealed that the GBA is coming up with a programme dubbed “Black Fighters” whereby the best boxers who are world title potentials would be camped and groomed for top world championships.

According to Mr Neequaye, he wants the government and corporate Ghana to invest and reap the proceeds and profits in boxing.

He hinted that very soon the GBA TV and website will be functioning regularly, and urged all the staff to work hard for Ghana Boxing.

Manyo Plange presented his West African Flyweight and Bantamweight title belts to the staff at the GBA office.

Mr. Patrick Johnson, General Secretary and Golden Mike Tetteh congratulated Plange and inspired him to be focused and go for the world title.