Quaye, Dorgbetor and others promise to thrill on Ace Promotions Bill on October 16 at La Palm Royal Hotel 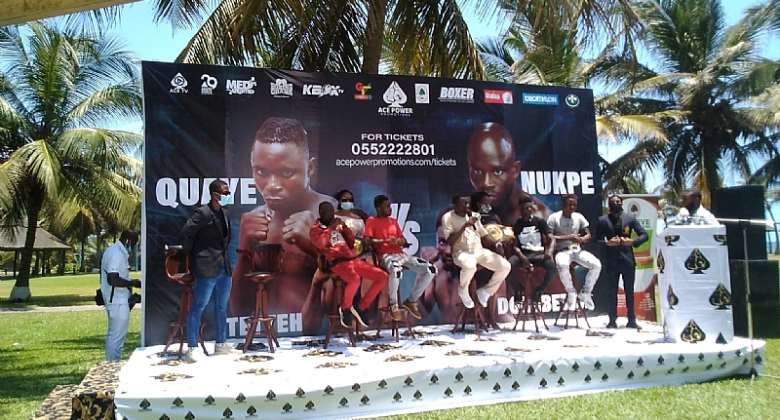 Boxers featuring on the upcoming Ace Boxing Promotions bill at the La Palm Royal Beach Hotel have promised to put up explosive shows.

While some say it would be a thriller, others said it is going to be action-packed.

According to the promoters, gates for the packed bill will open at 2pm on Saturday, October 16, 2021, and boxing fans will see real action from the big boys from 7pm.

At a press briefing to introduce the boxers, they all promised to put up good fights to raise the standard of boxing in Ghana once again.

The main bout will be between Robert Quaye aka ‘Stopper’ and Nathaniel Nukpe for the UBO International super lightweight title, boxers have bragged on winning.

Nukpe (13-7-1), a southpaw who comes from Aflao and has fans in Ho, Denu and other places in the Volta Region said he is not intimidated by the 19-0 record of Robert Quaye and will surprise boxing fans.

“Stopper cannot stop me, I am not afraid of him and I will shock him,” he said.

Undefeated Holy Dorgbetor who faces Success Tetteh for the National and UBO Intercontinental featherweight titles said he is looking beyond for bigger challenges and bigger titles.

Also on the bill is Emmanuel Quartey aka ‘ Akufo Addo’ versus Joshua Owusu, and Raphael King against Emmanuel Allotey.

Tickets can be obtained at www.acepowerpromotions.com/tickets or call 0552222801.

Meanwhile, Mr John Manfo, a member of the Ghana Boxing Authority (GBA) board has commended the promoter and matchmaker for getting quality boxers for the bill dubbed ‘Danger Zone'.

Park your car if you don't want to be vaccinated — Dr John N...
49 minutes ago