If the centre does not hold, Milo will fall apart 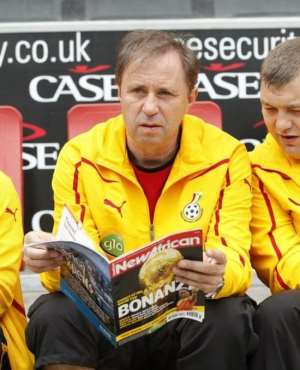 On Friday, 24th September, 2021 at the Ghana Football Association (GFA) secretariat, as I joined colleague media personnel for the official unveiling of the Serbian trainer Milovan Rajevac as the returnee Black Stars coach, Nana Tuffuor’s song, “Me yere dada s3n b3 ware me”, to wit, “my ex-wife, please come back” kept replaying in my mind.

The GFA in an attempt to win the upcoming Africa Cup of Nations and qualify to the FIFA 2022 World Cup in Qatar found it imperative to revive their old relationship with Rajevac. The 67-year-old comes back to take over the Black Stars job after 11 years of leaving the country without a formal farewell.

While the general secretary of the GFA, Prosper Harrison Addo was giving a vivid details of the one-year contract signed with Rajevac, which included a monthly salary of $30,000, a financial package of $600,000 if Milo is able to win the 2022 Africa Cup of Nations and qualify to the global showpiece, I asked myself, is Milo the right person to revitalise the team ahead of their immediate international assignments or it’s a knee-jerk approach to solve the poor performance of the Black Stars in recent years.

I have also been wondering, despite Milovan succeeding with the Black Stars in 2010, can he within a short period (one- year) turn the fortunes of the Black Stars around?

I am not a prophet of doom but even the blind can see that the current state of the Black Stars does not need a premature decision like what the Ghana FA has taken.

From 2008-2010, the Black Stars had a very solid team (and no I didn’t mention talent but a team), which is made up of great talents. Even when asleep, any lover of the game could mention the first 11 of the Black Stars and get at least 70% of it correct. The Black Stars in 2008 was 26th on the FIFA ranking, and fast-forward to 2010, the team leapfrogged to the 23rd position. The name, Ghana Black Stars was a fearsome brand, because it paraded players that played as a team and had great talents. Any good/average coach at the time could have achieved the feat Milovan recorded.

However, the national team after 2015 had transitioned in all departments. Coaches have been experimenting with players, yet for the past six years the Black Stars cannot boast of a solid team as old players fade out.

Avram Grant on his appointment in 2015, said he was rebuilding the team, Kwesi Appiah took over in 2017, he also announced that he was rebuilding a team and CK Akonnor took over and the rebuilding process continued. All the aforementioned coaches spent not more than three years with the Black Stars in their attempt to rebuild the senior side without the likes of Michael Essien, Derek Boateng, Sulley Muntari, Stephen Appiah, Mathew Amoah, Asamoah Gyan etc.

The hunger to meet unrealistic targets (win the Africa Cup of Nations) have led to the constant deterioration of the Black Stars. The team is in shambles, yet Milovan has been given a one year mandate to perform magic with the Black Stars and when he fails, a new coach will take over as usual.

What is the GFA’s plan to bring the Black Stars back on track? A lot of countries have gone through what Ghana is experiencing now, but it took a plan for these countries to get back on track. For instance, the Teranga Lions of Senegal went through worse period. They failed to qualify to the World Cup from 2006-2014 and with the Africa Cup of Nations, from 2010-2017. Senegal could not make any significant impact at the tournament. Yet when Alliou Cisse’ was appointed, the Senegal FA had a five-year plan for him and that didn’t change even after their abysmal performance at the 2018 World Cup and every football follower could bear witness to their impressive performance at the 2019 Africa Cup of Nation, finishing as runners-up.

Whether a comeback or not, whether a great coach or not, ‘The Milo’ project will fall apart if the Black Stars continue to be an experimental team and a dumping site for players to upgrade their records. The Ghana senior national team currently needs a plan and not a trophy-winning target.

Latest Photo Reports
Catch up with all the political quotes from our politicians.
Advertise here
More Opinion
ModernGhana Links
Is Asante Kotoko’s Mbella Etouga Worth The Hype ?
How a psychologist and an injured knee almost robbed the world of Pele
The state of sports betting in Ghana
Manchester United Cursed?
Ekow Amoasi writes: Otto Addo, the man who has turned water into wine
African teams need to avoid another World Cup disaster
Against all odds
Volleyball, a panacea for national unity: The General Gagariga Example
Does Otto Addo have the magic wand to change the fortunes of Black Stars?
TOP STORIES