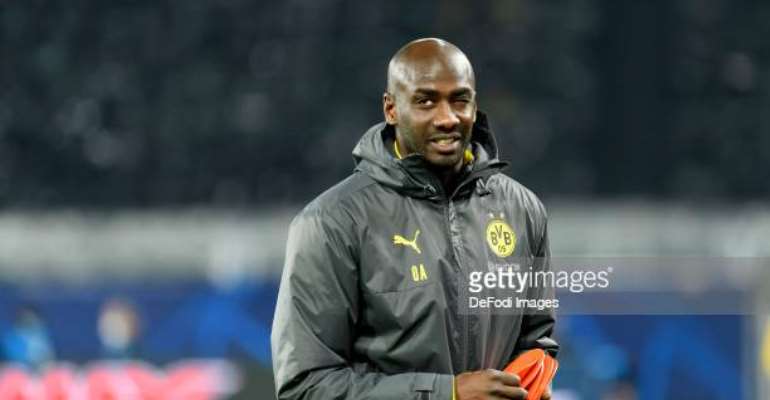 New Black Stars assistant coach, Otto Addo will be working for the team only on international breaks, according to the Ghana Football Association (GFA).

Addo, who currently works as an assistant at Bundesliga giants Borussia Dortmund was appointed by the Ghana FA to work with new head coach Milovan Rajevac along with Legon Cities gaffer Maxwell Konadu.

The three will continue Ghana’s quest of qualifying for the 2022 Fifa World Cup against Zimbabwe, Ethiopia and South Africa.

However, Communications Director Henry Asante Twum says Otto Addo will only be working as a service provider for the national team.

“What I know is that Otto will be working as a service provider at least for now, unfortunately, because having sought permission from his club, Borussia Dortmund, they felt they cannot release him.”

“It will take time for him to come and work for us fully. So for now Otto will be doing pay-as-you-go. He comes to work during the international breaks and then goes back,” he explained on Joy News.

Henry Asante Twum also revealed how the two coaches were selected for the job by Milovan Rajevac.

“The GFA only recommended the two deputies to the Serbian and he accepted it due to their vast experience both on the local and international front.

He added that Otto Addo will in the absence of a team scout, keep his eyes on getting competent Ghanaian players abroad for the Black Stars.

Ghana will play a doubleheader 2022 Fifa World Cup qualifier against Zimbabwe in October.