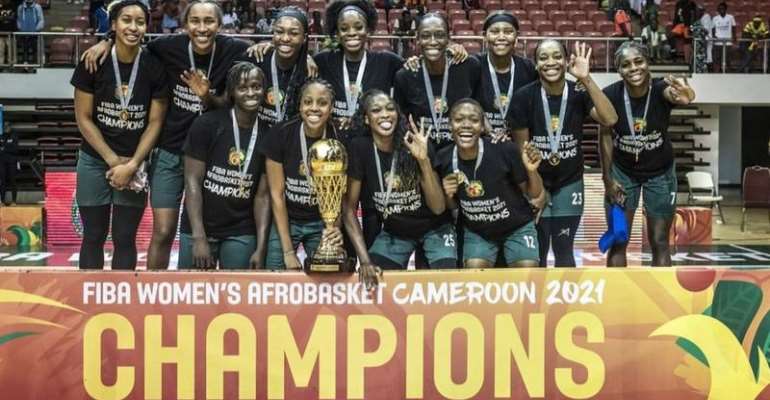 Nigeria captain Adaora Elonu is eyeing a strong future after D'Tigress became only the second side to win three African women's basketball titles in a row when beating Mali 70-59 on Sunday in Yaounde, Cameroon.

The Nigerians join Senegal in achieving the feat, with the record 11-time champions having won four straight championships between 1974 and 1981.

More than justifying their status as Africa's highest-ranked side, D'Tigress led 22-11 after the first quarter and never looked back, with the Senegalese closing the gap in the final quarter by when it was too little too late.

"If we continue our development, invest in our teams and youth division - and take control of that - we can be strong for the next two, 10, 50 years," rallied Elonu.

Elonu, whose 12 points in the final were accompanied by 13 from Ezinne Kalu and 15 from Victoria Macaulay, was delighted with the way in which her team won a fifth title for Nigeria.

"The things I stressed to the team most was we have to play together, as a team," she said. "We have great leaders on the team, we get our message across.

"You can't win MVP (Most Valuable Player) without your team and my team was a big part of that award. Sharing the ball and moving without the ball, none of that looks good if your teammates don't look good."

Mali's search for a first title since 2007 - and only second overall - goes on but they can reflect on an impressive display in Cameroon.

Not only did they go one better than their third-place finishes of both 2017 and 2019, but they also managed to put a damning report detailing 'institutionalised sexual abuse' in the Malian women's game to one side.

Commissioned by world governing body Fiba, the report spoke of 'decades' of abuse suffered by some female players, which Mali's federation - seven of whose members are now suspended - was adjudged to have covered up.

Like champions Nigeria, Mali - who last reached the final in 2009 - will now enter a qualifying tournament involving 14 other teams next February in a bid to reach next year's Women's Basketball World Cup in Australia.